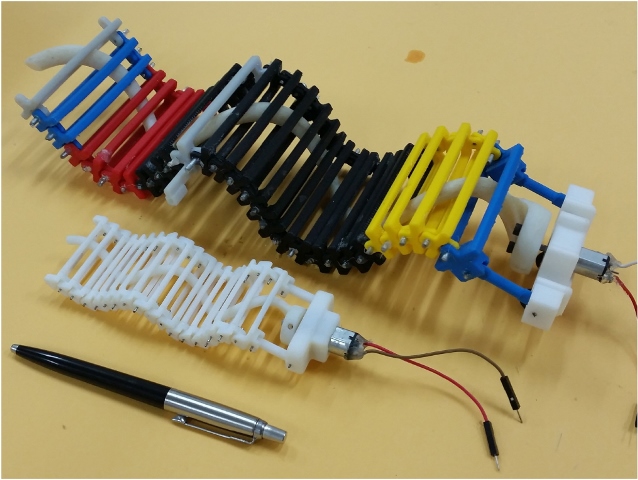 The single-actuator wave-like (SAW) robot developed by David Zarrouk at Ben-Gurion University of the Negev mimics the movement of a snake to push itself forward with an action similar to “the worm.” The 3D-printed design lets the robot move in a variety of difficult terrains, over obstacles, and a waterproof version of the SAW robot can swim 57 cm/s.

SAW (single actuator wave-like robot) is the first robot that produces a pure wave-like motion with a single motor. The robot was developed for medical, industrial and search and rescue purposes. The design is simple, 3D printed and the passive wheels are for steering only. In the movie we show that the robot can crawl over different surfaces, climb and swim. It reached a maximum speed of 57 cm/s which is 5 times faster than any other similar robot. The robot’s design is simply and highly reliable very little maintenance was needed.

photo via Ben-Gurion University of the Negev