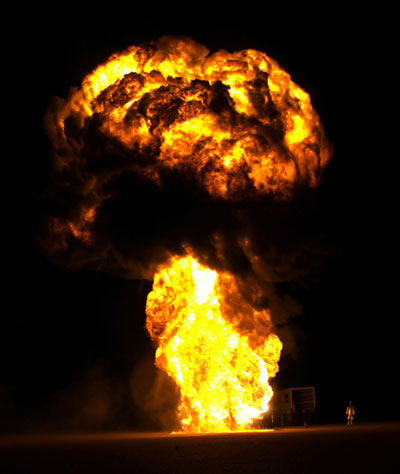 Some friends of ours are working on an amazing collaboration called the Simnuke Project, which is a simulation, memorial and reflection on Trinity, the original atomic bomb test that took place 60 years ago in New Mexico.

Here’s a description of the project:

On July 16, 1945 at 05:29:45 local time (Mountain War Time), a team of scientists reached the culmination of the Manhattan Project, the first test of a nuclear weapon. The event was code-named “Trinity”.

On July 16, 2005, at 05:29:45 local time we – a team of artists and engineers – will commemorate the 60-year anniversary of Trinity by simulating the look and feel of the detonation of a nuclear device. To do this, we are building what is possibly the world’s largest flame effect machine.

In the 60 years since that world-changing moment that was the Trinity detonation, the Bomb has permeated the collective consciousness, shaped generations, economies, and nations, and within the last decade almost completely disappeared. Children today barely know the fears of the nuclear age.

Through careful pre-simulation staging and close proximity to the simulation itself, we will create a somber memorial, a reminder to modern society of the grim destructive power that looms over everyday life. This simulation is not a celebration, nor a glorification of big fire, or of the destructive power of nuclear weapons. The 400′ fireball we are creating is a symbol – an awakening call to the persistent threat of nuclear destruction.

A gallery show July 28 – August 9 at Rx Gallery in San Francisco will accompany this event, we have gathered a searing collection of artworks from around the United States and Japan. The Simnuke Art Exhibit is a group show with 17 artists: five invited and eleven selected by submission. A sample of artists include Carole Gallagher, photographer and author of “American Ground Zero,” a groundbreaking work about the downwinders of Utah. In addition, we will be showing photographs from a series by Yosuke Yamahata entitled, “Nagasaki Journey: The Photographs of Yosuke Yamahata, Aug 10, 1945.” Mr. Yamahata photographed Nagasaki the day after the bombing took place, and the results are extremely powerful. Some other noted artists in the show are Michael Light, author of “100 Suns”, and Richard Ross, author of “Waiting for the End of the World.”

In addition, the Simnuke Project travel to Los Alamos, New Mexico to work with the local community to plant 60 trees as a lasting and healing memorial grove, replacing those destroyed in the devastating 2000 Cerro Grande fire.

UPDATE: Some video and photos from Simnuke are now online.