Foul-mouthed Scottish comic Frankie Boyle is more than happy to court controversy and to gleefully violate pretty much every notion of “good taste”. His comedy holds absolutely nothing sacred, and is in the spirit of Lenny Bruce though with a wildly different accent. I thought I’d put together a collection of some of his most funny and controversial highlights.

The clip above is from a guest stint on the BBC sketch show Rush Hour, but he is best known from his time on the improv comedy show Mock the Week. His material was so notorious on that program that they began a series of Mock the Week: Too Hot For TV DVDs for material that wasn’t allowed on air. Here’s a fine selection of his comedy from that show:

In 2009 Boyle released an autobiography called My Shit Life So Far. It offered the kind of cheery outlook on life and positive spin on the comedy business that you’d expect from a man who named a recent comedy tour I Would Happily Punch Every One Of You In The Face. 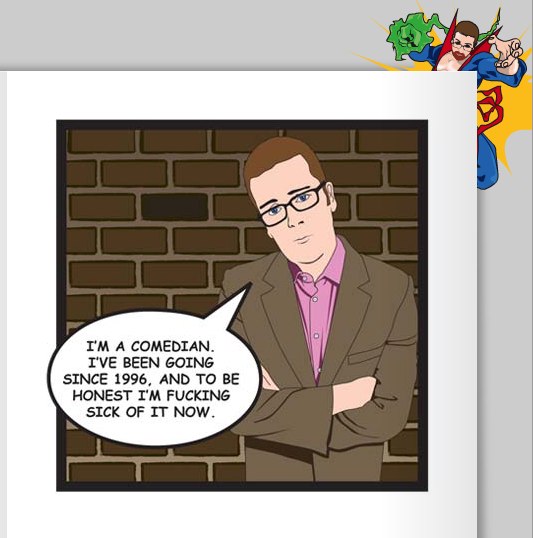 After leaving the cast of Mock the Week last year, Boyle had his own, very short-lived, show on BBC. It launched in November 2010, and there were some issues with the show title from the very start…

[While appearing on Friday Night With Jonathan Ross] Boyle revealed that the show was originally called Deal With This, Retards, but had to be changed to avoid offence. The show was consequently renamed Frankie Boyle’s Tramadol Nights (a reference to the opioid drug Tramadol and J.G. Ballard novel Cocaine Nights), with a broadcast date of November–December 2010.

The DVD of Tramadol Nights is now listed on Amazon.uk for a November release. But you can just look in the current British press for the latest controversy.