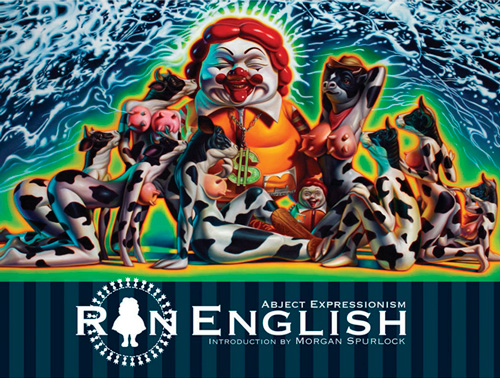 Ron English: Abject Expressionism is a hardcover book that gives a comprehensive look at the 20 year art career of Ron English. The book was designed by Attaboy, published by Last Gasp and features an introduction by Morgan Spurlock.

Ron English has been called the Robin Hood of Madison Avenue for his seminal work in billboard subvertising and is widely considered to be a founding member of the Culture Jamming movement. Abject Expressionism is a comprehensive survey covering 20 years’ of English’s career, from staged photography to neo-Surrealist oil paintings to street art. English’s work often involves “liberating” commercial billboards with his own messages: he wrangles carefully created corporate iconographies so they are metaphorically turned upside down, used against the corporations they are meant to represent. English’s work has been exhibited in galleries and museums worldwide, including Paris’ MOCA and NYC’s Whitney. An important look at the work of an artist who has been at the forefront of activist art movements in photography, painting and underground music.