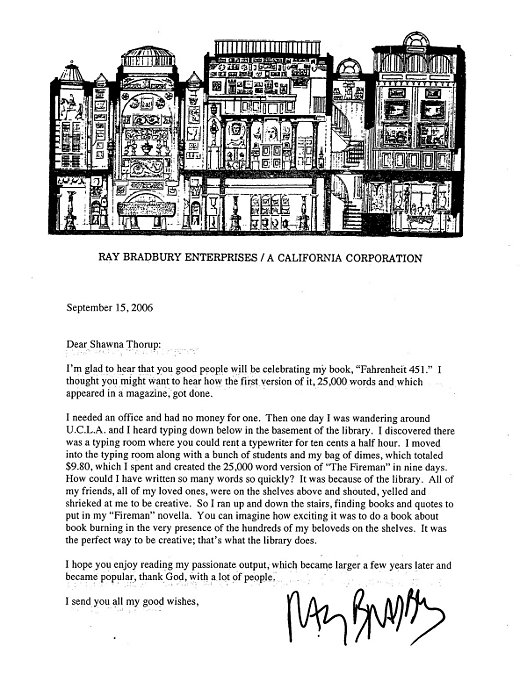 In a 2006 letter, sci-fi author Ray Bradbury described what it was like to write the first version of Fahrenheit 451 in the basement of a library at UCLA. The letter was sent to the Assistant Director of the Fayetteville Public Library—Fahrenheit 451 had recently been the subject of a city-wide “Big Read.” The transcript follows:

I’m glad to hear that you good people will be celebrating my book, “Fahrenheit 451.” I thought you might want to hear how the first version of it, 25,000 words and which appeared in a magazine, got done.

I needed an office and had no money for one. Then one day I was wandering around U.C.L.A. and I heard typing down below in the basement of the library. I discovered there was a typing room where you could rent a typewriter for ten cents a half hour. I moved into the typing room along with a bunch of students and my bag of dimes, which totaled $9.80, which I spent and created the 25,000 word version of “The Fireman” in nine days. How could I have written so many words so quickly? It was because of the library. All of my friends, all of my loved ones, were on the shelves above and shouted, yelled and shrieked at me to be creative. So I ran up and down the stairs, finding books and quotes to put in my “Fireman” novella. You can imagine how exciting it was to do a book about book burning in the very presence of the hundreds of my beloveds on the shelves. It was the perfect way to be creative; that’s what the library does.

I hope you enjoy reading my passionate output, which became larger a few years later and became popular, thank God, with a lot of people.

I send you all my good wishes,

Ray Bradbury died on June 5th at the age of 91.