The quirky music video for the song Zeroes & Ones by California-based indie rock band Baby Seal Club is full of chickens pecking at beet-filled human figures in a tiny faux Apple store. The song (which I think is pretty great) is from their upcoming album titled Default World, due out in summer 2012. The video was conceived & produced by Fudo, Wizzbang, Olava & Uncle Stabby.

I have raised many birds from egg to adulthood and one thing I’ve discovered along the way is that the baby chicks really enjoy eating the shredded vegetable fiber that shoots out the back of our big juicer. Being a somewhat macabre chicken-wrangler and verified horror flick fan, I noticed that the beet fibers looked a lot like viscera and guts – the amazing reddish color, the stringy consistency, and the hard-to-identify-on-film quality of the stuff thus sparked an idea. I began feeding them the stuff everyday as a “treat,” so they would become good and hungry for it when it was time to be on the set. 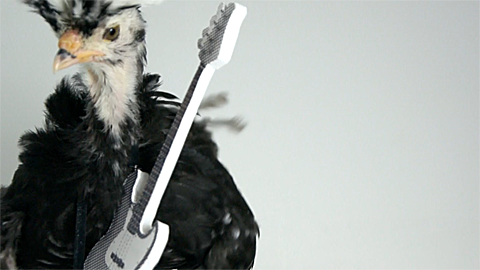