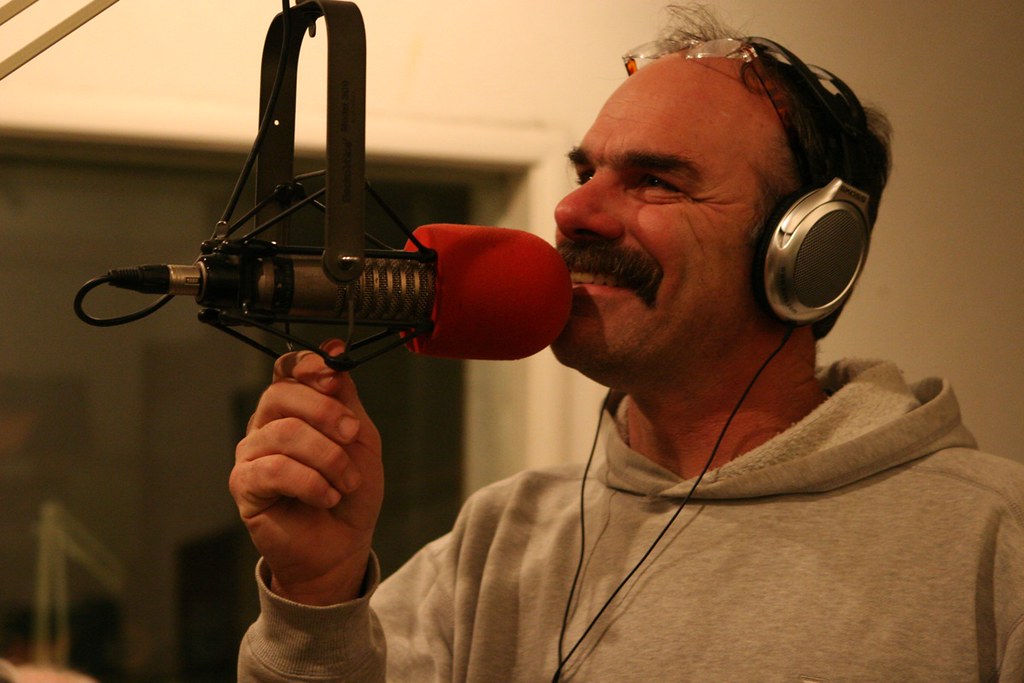 Church of the Sub-Genius High Priest (REALLY high!) and KPFA radio personality Doug Wellman or “Puzzling Evidence” as he’s known of to cultists and the power elite, has been posting edited videos from his backlog of tens of thousands of hours of the weirdest and most ridiculous events to take place in the Bay Area and Beyond from the last 25 years.

Doug has been with Subgenius since the halcyon days of the early 80’s. Among his exploits in intensive voyeurism, surreal tourism and enigmatic conspiracies, Doug has, among other notable accomplishments, killed (allegedly) Subgenius Prophet Bob Dobbs, inspired David Byrne to write the song “Puzzling Evidence,” been accused of being a Oakland Police Intelligence officer by a crazed anarchist lawyer and survived a combat tour of Viet Nam as a naval officer.

Doug and his fellow Subgenius potentate Dr. Howlin Owl Robins have hosted the Puzzling Evidence Radio Show for twenty years. Joined by Subgenius co-founder Philo Drummond in recent years, this show is now (I believe) the longest running show on the venerable lefty station as well as being the most confusing and the least dogmatic.

Doug was at the 1st and 2nd How Berkeley Can You Be Parade “PETA (People Eatin’ Them Animals” float/performance and recorded the tense exchanges between the Meat People and protestors.

This event (staged three years in a row for the family friendly Berkeley parade) was comprised of various “meat providers” such as Steven King’s Carrie White, Texas Chainsaw Massacres Leatherface , Farmer Vincent from Motel Hell and others. Our very own anti-meat protestors the “Veget-Aryans” were there with bullhorns decrying the offense of edible flesh. Badly burned BBQ and fresh GPC cigarettes were tossed out to the throngs of aging Berkeley hippies and their tie-dye wearing progeny (“…here kid, first smokes free!”) My favorite part was when two 15 year old Berkeley High debutants poked at one of the massive pigheads and, in true bewilderment asked: “How did you make these things???”

Doug shot one of the last large group ascents of the Bay Bridge prior to Homeland Security making it almost impossible to climb bridges post 9-11.

Doug recorded some interesting moments at Burning Man during the apocalyptic 1996 event. Watch for the “official” radio call response to an unsanctioned “protest” of the burn!

Doug was there to record for posterity Dick Cheney’s final hurrah in San Francisco:

If you want to know what young officers recently graduated from their respective academies (Naval, West Point, set) were doing on the tax payers dime as the Viet Nam War wound down in the early 70’s look no further than here.

Some other winners are:

There are tons of St. Stupid, Ask Dr. Hal, Extra Action, and rare Subgenius edits from another time and another place…….

Check them all out on the Puzzling Evidence TV YouTube channel.