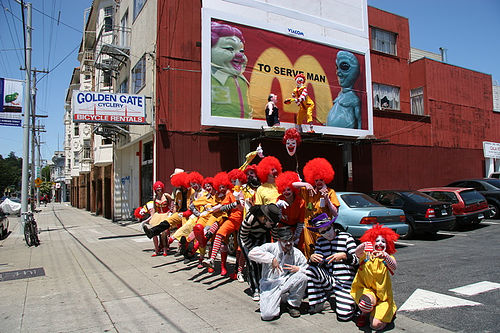 “Popaganda”, Pedro Carvajal’s excellent documentary on New York’s notorious culture-jamming, billboard liberating, pop artist Ron English, will be screening this Saturday, April 29th at Artist’s Television Access in San Francisco, as part of Craig Baldwin’s long running Other Cinema series. Members of The Billboard Liberation Front, which is featured in the documentary, will be interviewed by Neighborhood Public Radio (NPR) at 4:30pm before the screening which starts at 8:30pm and there will be a Q & A session with them after the screening. Last May The BLF and Ron English joined forces in San Francisco for the extraordinary “To Serve Man” billboard improvement.

In the second installment of our Pranks series, the BLF, those storied stalwarts of late-night billboard alteration, surface in our gallery’s merry, masked, and Mayday-mobilized, to introduce Pedro Carvajal’s POPaganda. Pedro’s hr-plus doc focuses on the antics of painter Ron English, a modern-day Robin Hood of Madison Ave., who renders an alternative universe of advertising subversion. Shepard Fairey, Daniel Johnston, and the Dandy Warhols also have a hand in the production. PLUS Craig Baldwin’s history of billboard hits, Bryan Boyce’s latest celebrity defenestration, and a preview of Negativland’s upcoming DVD. Free toast and grape jam (and grape wine)!