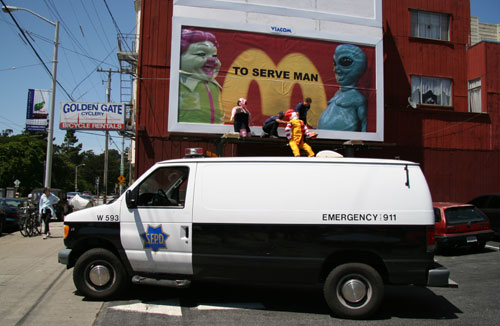 Pedro Carvajal has finished the final edit of his documentary Popaganda: The Art and Crimes of Ron English, based on the work of pop artist, billboard liberator Ron English. Pedro has added some new scenes based on the “To Serve Man” billboard improvement that Ron English and the Billboard Liberation Front collaborated on in San Francisco back in May, which commemorated McDonald’s 50th Anniversary. Earlier today, the BLF’s own Jack Napier described, in detail, the logistics of this hit on the BLF’s recently launched blog.

This new version of “Popaganda” will be screening at San Francisco’s Red Vic Movie House from September 23rd through 29th. Here’s the full schedule.

Popaganda: The Art and Crimes of Ron English is a film about the culture-jamming and billboard-liberation antics of Ron English. The modern day Robin Hood of Madison Avenue, Ron paints, perverts, infiltrates, reinvents and satirizes modern culture on canvas, in songs, and directly on hundreds of pirated billboards. Shot entirely guerilla-style, the film chronicles the evolution of an artist who offers an alternative universe where nothing is sacred, everything is subverted and there’s always room for a little good-natured fun. Also featuring art by Shepard Fairey and Cicada. With music by The Dandy Warhols, Daniel Johnston, Tripping Daisy and more. (78m)