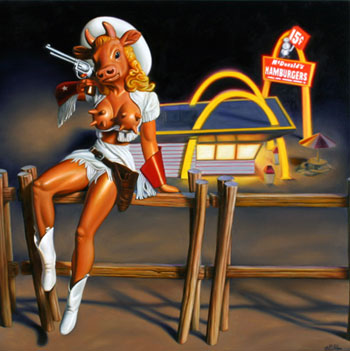 “POPaganda: The Art & Crimes of Ron English” is a feature-length documentary by Pedro Carvajal about our good friend, pop artist and billboard liberator Ron English. Pedro’s documentary is featured in SF DocFest 2005 with screenings taking place on Friday, May 13th and Saturday, May 21st at Women’s Building in San Francisco.

Pedro, who I met through Ron when he started work on this film a few years back, did a wonderful job documenting the amazing art of Ron English, including footage of Ron modifying billboards in broad daylight. Even local favorites The Billboard Liberation Front make a guest appearance.