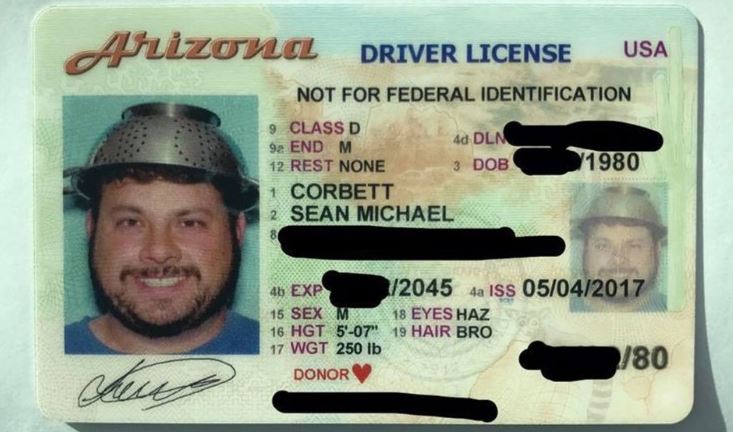 Sean Corbett of Chandler, Arizona is a huge Honda Del Sol fan and dedicated Pastafarian. In accordance with his religious beliefs pertaining to the Church of the Flying Spaghetti Monster, Corbett wears a colander on his head. When it was time for him to renew his drivers license, he was rightfully determined to represent. Corbett received a great deal of pushback over the course of two years, but ultimately an understanding Motor Vehicle Division manager allowed Corbett to be photographed with his religious head covering in his official driver’s license photo.

‘I tried a couple different locations and was met with a lot of pushback and resistance… I was scorned at every location I went to, and they put out a memo about me, so by the time I got to (the) fourth and fifth MVD, they stopped me at the door. They got angry at me and treated me with such disrespect’. He recently tried again and, after talking with the location’s manager, was able to take the photo.

Unfortunately, Corbett’s victory was short-lived. Once state bureaucrats found out about his license photo, they objected by putting a stop on his license and demanding he return for another photo. Corbett is currently with the AZDOT Civil Rights department to assist him with claim of religious discrimination.

After communicating with the OIG regarding my license, it is currently not revoked or suspended. They have a stop on the license which prevents me from making duplicates, but the license is still valid at this moment. They are requesting that I return to the MVD to surrender the license and be photographed without the headwear. I confirmed that my photo does not interfere with facial recognition software. This indicates that there is no error, they simply are discriminating against my religion. I have reached out to the AZDOT Civil Rights department and have spoken with a representative who is familiar with my story and is working with me to see what steps are necessary to fight this issue.

photo via The Church of the Flying Spaghetti Monster