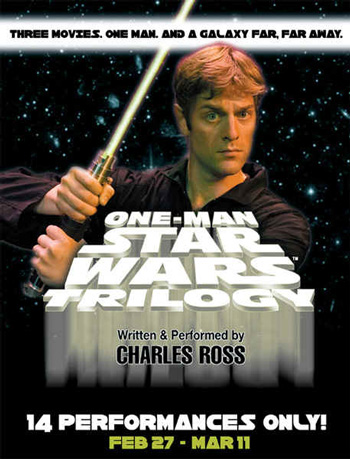 Canadian actor Charles Ross is currently in town performing his One Man Star Wars Trilogy at Post Street Theatre in San Francisco through March 11th. Several people I know went to the opening last night and said it was a really hilarious show.

One Man Star Wars Trilogy is a hilarious, high energy, nonstop blast through the original Star Wars trilogy, but with one catch: there’s only one cast member, Charles Ross. This writer and solo performer spent way too much of his childhood in a galaxy far, far away and continues to spend his adulthood there. Ross plays all the characters, recreates the effects, sings the music, flies the ships, and fights both sides of the light saber battles, making for a side-splitting evening.

Charles also performs in the One Man Lord of the Rings, doing 40 characters from 3 masterworks in 3600 seconds.