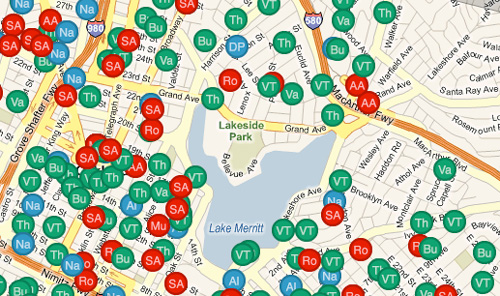 Oakland Crimespotting is an beautifully designed interactive tool to help people map and understand crimes in Oakland (Oakland’s crime rate is one of the highest in the country). You can select which specific crimes you want to see, as well as adjust the time period when those crimes were committed. It also allows you to set up crime alerts via email and RSS.

Instead of simply knowing where a crime took place, we would like to investigate questions like: Is there more crime this week than last week? More this month than last? Do robberies tend to happen close to murders? We’re interested in everything from complex questions of patterns and trends, to the most local of concerns on a block-by-block basis.

Oakland Crimespotting was created by Stamen Design, the guys behind the Digg visualizers, and a bunch of other great stuff. They were frustrated by existing proprietary systems that provide limited information, so they decided to make something better.