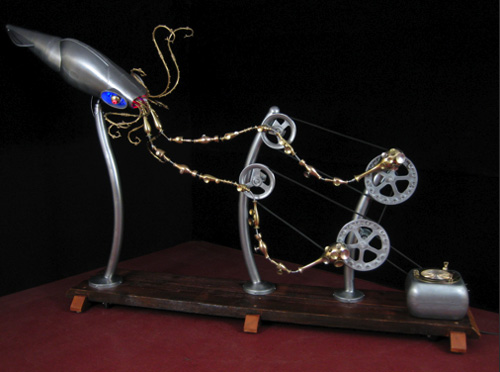 Nemo Gould has posted a great article on Instructables showing how he created his fantastic “Giant Squid” (2006) kinetic sculpture using found materials (here’s a photo I shot of it at RoboGames 2007).

This sculpture grew out of a long time fascination with the Giant Squid. My name being Nemo has meant a lifetime of “Captain Nemo” references, thus making me aware of these monsters since an early age. I am a sculptor who works almost exclusively with found materials, though typically I like to build things that look more like classic robots. For that reason this project posed several challenges. For one, I really wanted it to be a Giant Squid which meant finding some large objects, and it would mean breaking a lot of habits to depart from more human like forms. I also decided not to limit myself to aluminum, as I had been at the time, and integrate some brass pieces as well.

Nemo also has articles on how he build his Giant Kinetic Robot, Jacob’s Ladder and Chopper Bicycle sculptures.

Thanks to Ed Hunsinger for the tip!