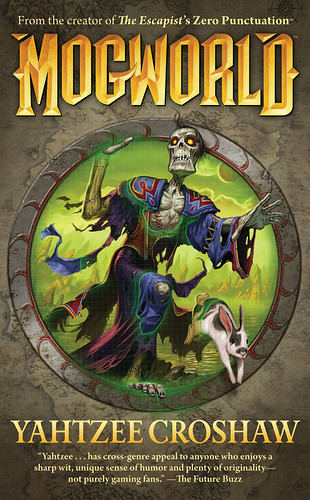 “Mogworld”, the first novel from Ben “Yahtzee” Croshaw, is now available for pre-order from Amazon. A comic fantasy in the tradition of Douglas Adams and Terry Pratchett, Mogworld has a particularly contemporary twist: the main character, Jim, is a NPC in a massively multiplayer online role-playing game.

In a world full to bursting with would-be heroes, Jim couldn’t be less interested in saving the day. His fireballs fizzle. He’s awfully grumpy. Plus, he’s been dead for about sixty years. When a renegade necromancer wrenches him from eternal slumber and into a world gone terribly, bizarrely wrong, all Jim wants is to find a way to die properly, once and for all.

On his side, he’s got a few shambling corpses, an inept thief, and a powerful death wish. But he’s up against tough odds: angry mobs of adventurers, a body falling apart at the seams and a team of programmers racing a deadline to hammer out the last few bugs in their AI.

Best known as the creator of Zero Punctuation, a skull-splittingly funny series of hyper-caffeinated rants-cum-videogame reviews, Yahtzee is part of a new breed of reviewers currently staking out their territory on the wild – and highly idiomatic – frontier of DIY online criticism. Like Harvey Plinkett of Red Letter Media, Yahtzee favors a take-no-prisoners approach to criticism, subjecting games to the same vivid brutality with which they so often casually bludgeon their players, and wielding his staccato wit like a verbal chaingun until his target is reduced to a pile of apologetic, smoking ash.

If Mogworld proves even half as funny as Zero Punctuation, it should be a wild and snarky delight, written with the passion and perspective that only a lifelong, obsessive gamer possesses.

Mogworld will be released by Dark Horse in August. To tide you over until then, here’s a small selection of episodes of Zero Punctuation, all highly entertaining, even if you’re not a hardcore game geek.