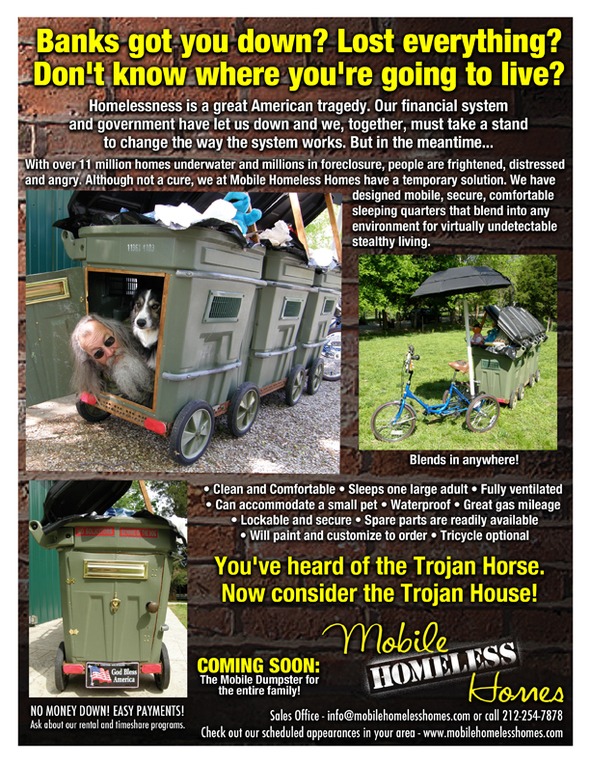 Legendary prankster Joey Skaggs is back with his latest project, Mobile Homeless Homes, featuring a “Trojan house” in the form of live-in garbage cans on a trailer behind a bike that will be accompanied by outraged homeless muppets who will all be parading to Goldman Sachs starting at 11am on Monday, April 23. Here’s the full press release:

NEW YORK, April 21, 2012 — Homelessness is a great American tragedy. Our financial system and government have let us down and we, together, must take a stand to change the way the system works. With over 11 million homes underwater and millions in foreclosure, people are frightened, distressed and angry.

Although not a cure, Mobile Homeless Homes (MHH) offers a temporary solution — low cost alternative living spaces for the millions of upside-down, underwater or foreclosed homeowners who have lost their houses due to the banking crisis that caused the real estate collapse. The MHH centerpiece is a camouflage, stealth, mobile home made from a series of connected plastic garbage cans, propelled by a tricycle, that will be undetectable by authorities. It blends into any urban environment.

Designed by artist Joey Skaggs, this Trojan house has been created to focus attention on the disastrous effects of government deregulation on the welfare of the general public and to underscore the fact that people are not powerless to create change; that people should not be afraid to use their First Amendment rights to denounce actions they believe are unethical and criminal.

On Monday, April 23, 2012 beginning at 11:00 a.m. at 287 Spring Street (between Varick and Hudson) in New York City, Skaggs will parade his Mobile Homeless Homes prototype down to Goldman Sachs. He will be accompanied by his troupe of costumed muppets including the Fresh Juice Party band, performing their original “Mobile Homeless blues” ballad (lyrics). They will head from Spring Street to West Street and then down West Street to Goldman Sachs at 200 West Street. Other targeted sites will be announced at a later date on the MHH website.

Goldman Sachs has been selected as the destination for the MHH debut as it is one of the primary companies responsible for causing the housing crisis. The muppets are there to help hold them accountable, because Goldman Sachs employees commonly have disrespectfully referred to their clients as muppets. The word muppet in British slang is a derogatory term commonly used to mean idiot or loser.

“I’m not a bank regulator. I’m not a legislator. I’m not a politician. I’m an artist. I believe it’s my responsibility to do what I can to bring attention to the issues and inspire our lawmakers to make the critically necessary changes to protect the public from greed and fraud,” says Joey Skaggs.

The MHH performance has been designed to be a fully legal public expression of individual rights. With the current rash of arrests of Occupy Wall Street protestors and the forcible removal of personal belongings from people sitting peacefully in parks, Skaggs says the MHH procession will be on the move at all times, except when waiting for street lights to change. And, since Mayor Bloomberg just the other day kissed Ms Piggy and announced that the Muppets (of Sesame Street fame) are now the official New York City family ambassadors, it might prove embarrassing if the police arrest Ms. Piggy as she exercises her First Amendment rights.