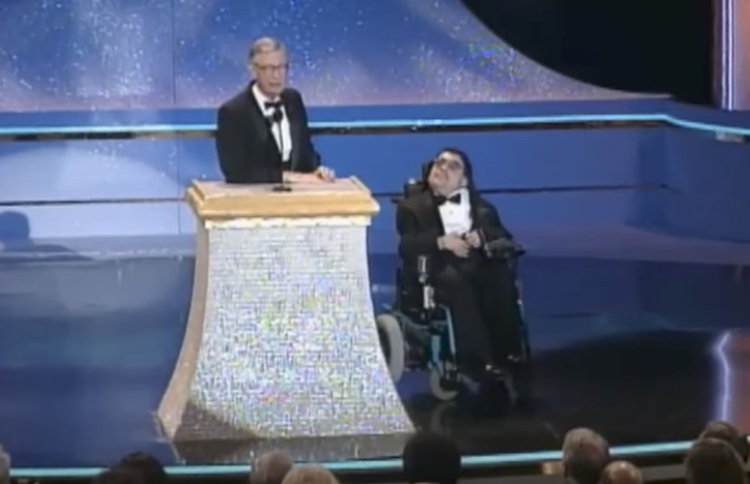 During the 1999 induction ceremony into the Television Hall of Fame, a very dignified Fred Rogers suddenly leaped up onto the stage when he saw his longtime friend Jeff Erlanger in the lights. The two had met in 1981, when Erlanger came onto the set of Mister Rogers’ Neighborhood to talk about his having to use a wheelchair. The brave five-year-old confidently spoke about his condition, which was caused by a tumor at seven months old, his multiple surgeries, and how he lives his life. In a touching moment, the two sang “It’s You I Like”.

18 years later, Erlanger repeated the phrase to his favorite neighbor.

Fred Rogers is inducted into the TV Hall of Fame. Jeff Erlanger, who appeared on Mister Rogers Neighborhood in 1981, surprises Rogers at this ceremony.

Mister Rogers and Jeff Erlanger singing “It’s You I Like” in 1981.

Jeff Erlanger’s parents talk about their disabled son’s visit to Mister Rogers’ Neighborhood in the 2018 documentary Won’t You Be My Neighbor?