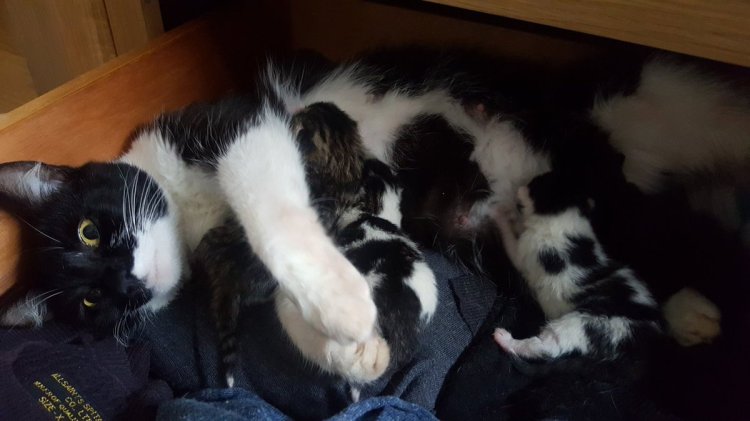 On May 30, 2018, British filmmaker Paris Zarcilla went upstairs to his bedroom to grab a sweater and instead found that a beautiful black and white cat had given birth to adorable kittens right underneath his bed. Despite the fact that the cat wasn’t his, Zarcilla immediately fell in love with this lot of felines who crashed into his life. Zarcilla isn’t sure how the cat got under his bed, but was just so happy that they did.

I suspect it’s a neighbour’s. I leave my back door open a lot. Slept in my living room last night. Went upstairs to grab a jumper. Boom. Kittens. I am genuinely baffled.

So… I JUST FOUND A CAT THAT IS NOT MINE AND IT HAS HAD BABIES UNDER MY BED. pic.twitter.com/83ktBHGgT5

Zarcilla even found himself vowing to be a better man because of the kittens.

Beginning to experience the dread and emotional turmoil of the idea that I might have to give up the fluff blessings at some point. This may be someone’s cat and I don’t want to take away this joy from anybody. But my dad instincts have kicked in so hard.

To my cat sons and daughters, I'll be the hero you deserve, but not the one it needs right now (because of mama cat). So I'll hunt for you, because I can afford it. I'll be your silent guardian, your watchful protector. Love, #CatDad pic.twitter.com/JkaUpGzXCP

Literally re-emerging from underneath the bed. Possibly now as a different person. Reborn as #CatDad. Wiser. Hairy-er. Learning secrets of the universe and life through the unexpected birth of these gaddamn fluff miracles. Praise be to the Cat Gods. Meow pic.twitter.com/IAcqYK6eBN

This is too much. I'm approaching nirvana. I legitimately suffer from anxiety attacks and depression and my capacity to deal with it recently has been waning. The Cat Gods have smiled upon me with benevolence and turned the monsters under my bed into kittens.

Zarcilla is still unsure as to which human the cat and kittens belong, but after speaking with Animal Protection, he learned that the cat cannot be separated from her kittens for four weeks, after which she can be scanned for a chip.