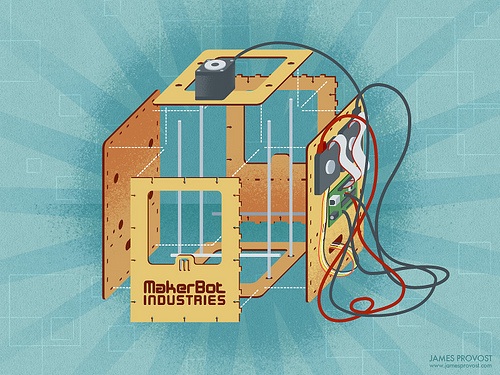 Bre Pettis along with friends Zach Hoeken Smith and Adam Mayer have started a new company, MakerBot Industries, “to bring rapid prototyping and 3D Printing to the masses.”  Here’s more on the launch from Bre, NYC Resistor and investor Jake Lodwick.

The kits are modular, modifiable, and built to be hacked.

The initial product: The CupCake CNC for the incredibly precise, computer-controlled frosting of cupcakes.  And if buttercream isn’t your sculptural medium of choice, there’s a plastic extruder as well .  The bot takes up as much desk space as a printer, and can make stuff about the size of a Rubik’s Cube.  The company plans to start shipping next month, though pre-orders are available, and it’s priced at $750 (with discounts available on bulk orders).  Though individual parts can be ordered if you want to hack together something yourself. Jonathan Coulton posing with the MakerBot at SXSW Interative 2009.

illustration by James Provost and photo by Bre Pettis