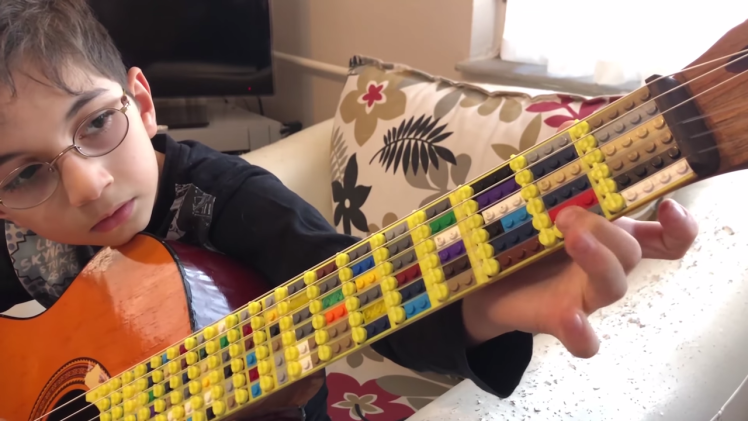 When his son created a microtonal guitar (guitar with moveable frets) out of LEGO bricks, Turkish guitarist Tolgahan Çogulu decided to put one just like it onto a real guitar.

It all started two years ago when Atlas made the adjustable microtonal guitar keyboard with Lego. After finishing the keyboard, he said I could use it on the real guitar.

Father and son worked together to create an absolutely incredible playable microtonal guitar using Atlas’s original LEGO bricks and 3D printed pieces they made themselves.

Two years ago when my son Atlas gave me this idea, it was hard to imagine that we would reach this point. I am glad to see that this guitar works well.

After playing with it for a bit, Çogulu noted how easy it was to show Atlas different scales and modes using the easily moveable frets.

I…realized that this design can also be used to teach music theory on the guitar We removed all the frets and placed only 5 frets to play the C major scale. Then, by changing the location of the three frets, I showed Atlas how we can make the C minor scale. Finally, I showed the Balinese pentatonic sequence, which contains three microtones.