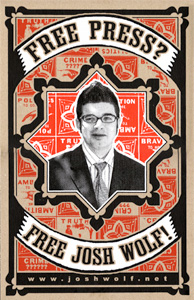 Josh Wolf, the video blogger who was arrested last August for being in contempt of the court by refusing to turn over protest video to police, is going to be released from jail after serving 226 days. This is the longest time any US journalist has been imprisoned for refusing a subpoena. Keep in mind that Josh was never been charged with an actual crime. It looks like Josh’s long ordeal is finally coming to and end and he may be out as soon as today. Stay tuned to his blog for updates.

Josh has also made public the unedited protest video that is at the center of this controversy.

UPDATE 1: An impromptu Josh Wolf Free! party has been organized for tonight (Tuesday, April 3rd) at House of Shields starting at 6pm.