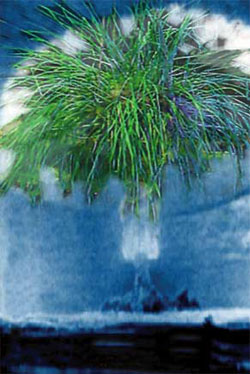 San Francisco Artist Joe Mangrum examines the idea of E=MC 2 (Environment is My Catalyst 2) and sprouts 300 lbs of wheatgrass in an explosive green mushroom cloud that fills the four story glass atrium at Red Ink Studios. Come revel in this reaction to the industrialized world.

Joe Mangrum’s installations have been shared with audiences both locally and internationally. He attended the Florence Biennale in 2003 where received the prestigious Lorenzo de Medici award in “New Media”, for his stunning piece, “Fragile”. Joe has also been nominated locally for the SFMOMA “SECA” award. Documents of 11 years of his installations can be viewed at www.joemangrum.com. Many of these photographs are the subject of a comprehensive, forthcoming book to be released in the Fall, 2005

“Detonation Earth” is on view until June 14th

Tonight’s opening will also feature “The Waribashi Project” by Donna Keiko Ozawa which makes use of 100,000 used chopsticks. Both installations are in conjunction with United Nations: World Environment Day 2005 and will be documented by Tracy Storer’s 235 lb. Polaroid-hybrid camera, which creates instant 20″ x 24″ prints.