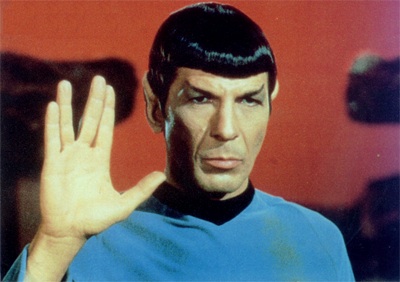 Rabbi Yonassan Gershom takes a look at the Jewish origins of Spock’s Vulcan salute which debuted in the Star Trek episode “Amok Time”.

The Vulcan greeting is based upon a blessing gesture used by the kohanim (koe-hah-NEEM) during the worship service. The kohanim are the genealogical descendants of the Jewish priests who served in the Jerusalem Temple.

Rabbi Gershom runs the website TrekJews.com and has written a book on “Jewish Themes in Star Trek”.

On an Archive of American Television interview Leonard Nimoy explains how he created the Vulcan salute for Star Trek which came from his Jewish heritage.