In February 2018, the kind souls at the animal rescue shelter “Howl of a Dog” in Resita, Romania reached out to a filthy dog who was wandering around the railyard, do his best to survive out on the streets. Despite the fact that the dog was injured, half-blind, heartbroken and on the older side, he was open, curious and seemed amenable to the help being offered. When they brought him back to the shelter, they noticed he had been chipped. They contacted the dog’s original human from the chip, but he refused to take the dog back. He did tell them, however, that his name was Bobi.

Once patched up and cleaned up, Bobi experienced a second puppyhood of sorts. He also showed himself to be very playful, affectionate and most of all forgiving of people.

A post shared by Howl Of A Dog (@howlofadog)

Bobi recovered so well, that it took only a few months for a Delaware couple with two other dogs to adopt Bobi as their own.

He was rescued by Howl Of A Dog organization and, a few months later, his story took the happiest turn being adopted by a loving family from Delaware, United States. Bobi’s adoptive parents have a lot of experience with senior dogs, having adopted many dogs in need over the years, and being able to offer Bobi the best care.

Bobi travelled all the way from Romania to the United States to meet his new family.

Bobi at Vienna airport, getting ready for his flight to his forever HOME in Delaware, United States. Bobi’s adoptive family has a lot of experience with older dogs and he will receive the best care. They have a very nice house with a large backyard, near the ocean, so there will be many walks on the sandy beaches for Bobi, together with his brothers, Jackson and Bo – two handsome Australian Shepherds. He has arrived safely to his new home and we will be back with more details as soon as he gets settled in. Thank you so much everyone for your support, for sharing Bobi’s rescue video and sending him so many good thoughts and wishes! We have received hundreds of messages and emails from people all over the world wishing Bobi much love and happiness. Thank you all for your compassion and love for animals!!! www.HowlOfADog.org #howlofadog #happydogbobi #happyseniordog #adoptseniordogs #happydoggie

Bobi’s first week at his adoptive home. He is doing great, has adjusted quickly and enjoys playing with his brothers Bo and Jack. 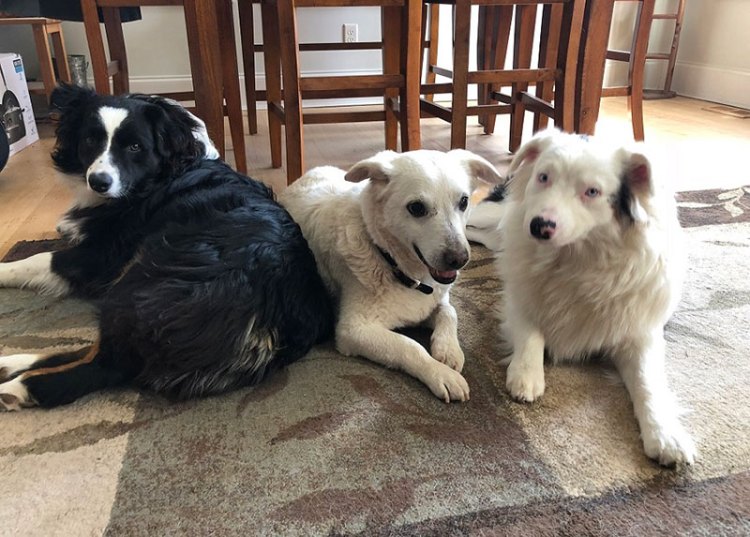