One of the first things that many people do when they come to California is seek out the nearest In-N-Out Burger. Founded in 1948 in the Baldwin Park suburb of Los Angeles (now headquartered in Irvine), In-N-Out Burger is pretty much the exact opposite of McDonald’s, the other famous southern California fast food hamburger chain. They are still a family owned business, one that has grown slowly over the years (there are now stores in Arizona and Nevada), primarily via word-of-mouth, with very little advertising. Also, they keep their menu very simple, with just a few items, all of which are made fresh on location, not delivered to the store frozen. For example, they hand cut potatoes which are then made into fries. Here are some photos I shot on a recent trip with Lori to the Millbrae, CA In-N-Out Burger. One of the things that helps perpetuate In-N-Out Burger’s cult like following is their secret menu, which includes making things “animal style” where secret sauce, onions and melted cheese is added. John Marcotte (Badmouth) has a great write-up on their secret menu. 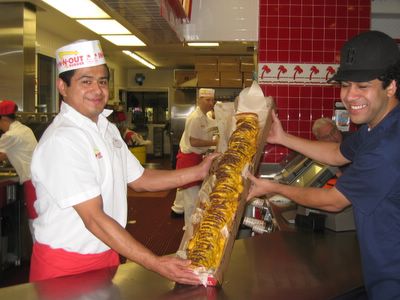 The secret menu also includes various burger/cheese slice combos that can be ordered, like a 2×4, 3×3 and 4×4 and the Wikipedia article on In-N-Out Burger has a stunning photo of a 20×20, but it doesn’t stop there. In October 2004 blogger What Up Willy! and his crew, which included Zappos.com CEO Tony Hsieh, successfully challenged a Los Vegas In-N-Out Burger to make a 100×100 burger. Here’s their full write-up and video of this amazing story about how they ordered and consumed their 19,490 calorie hamburger. Another interesting thing to note about In-N-Out Burger are the references to Bible verses that they print in hidden locations on their food packaging, for instance “John 3:16” is printed on the bottom of their cups. photos by Scott Beale & What Up Willy!