Many of us think of Christopher Walken as “The King of New York” — but how many remember Walken as the king of all those stop-action animated holiday TV specials that shaped the very foundation of our ability to see right from wrong, Santa from Satan, and when how sometimes in life an elf or two maybe occasionally needed to get whacked so little Timmy could get his toy boat?

Well, local theater company MacGyver Productions remember Walken’s formative voice-acting jobs from children’s television specials such as “The Year Without a Santa Claus” (1974), where demonic Heat Miser (voiced by George S. Irving) battles his arch-nemesis Snow Miser over the fate of Santa Claus. ‘Cause look: Snow Miser, he *owns* the North Pole. And he doesn’t like to be left out of business, unless you like your reindeer fulla bullet holes (hey, there’s “transportation costs” too). So MacGyver Productions has — this weekend only, in San Francisco, four nights — turned Walken’s ouvre as the voice of evil clay into, you guessed it: a cabaret called I Am Snowmiser: Walken In A Winter Wonderland.

Christopher Walken [as played by Sean Owens] recounts his life for his official biography, reliving the greatest and most dreadful moments of his career, in such roles as Snowmiser, Frosty the Snowman’s whistle-swallowing Cop, and the nay-saying anti-dentistry Boss Elf. He broke the hearts of Mrs. Claus and the Doll from the Island of Misfit Toys, but ultimately found a holiday spirit which cannot be denied. Walk in our winter wonderland and bask in our ranks of the best local SF talent! 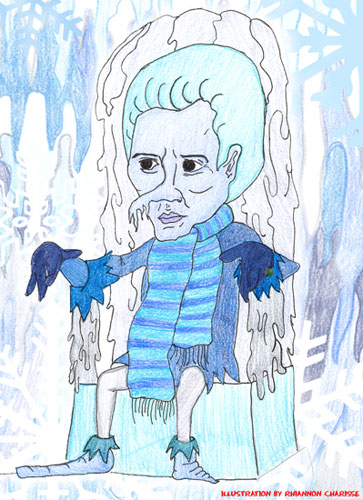 UPDATE 1: The “I Am Snowmiser” trailer is now online.

UPDATE 2: Scott shot some photos of “I Am Snowmiser”.