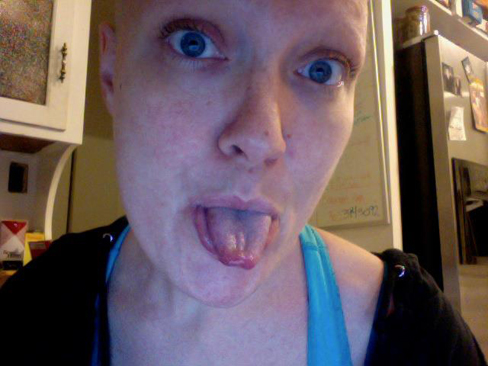 L.A. Record writer Nikol Hasler was diagnosed with Non-Hodgkins Lymphoma cancer and has been paying the exorbitant costs for treatment out of pocket. L.A. Record has started Help Nikol Hasler Laugh at Cancer, a fundraising campaign to help her pay for the mounting costs of cancer treatment. Donations are being taken now through the L.A. Record staff blog.

Nikol Hasler is one of the kindest, funniest and coolest people we know. She’s a successful web series host, a relationship blogger, a mom of three, an L.A. RECORD writer, a published author of articles and books about love and sex, a calendar model, a survivor of the Illinois State Foster Care system (the Harvard of child abuse), a volunteer do-gooder, a prodigious pickler, and a smartass. In November, she was diagnosed with Non-Hodgkins Lymphoma, a form of cancer best known for not being Hodgkins Lymphoma. She was prescribed with a standard treatment regiment of radiation and chemotherapy followed by possible surgery.

At the time, she was given a prognosis of only 3 years to live. But Nikol buckled down, going through rounds of radiation and chemotherapy that occasionally led to life-threatening complications, 104 degree temperatures, and icky sicknesses like the “flesh eating superbug” MRSA and blood sepsis. Being tough as nails, what didn’t kill her seems to have made her stronger, and miraculously, there are signs that she is beating her cancer off with a big, irradiated stick! Initially she was told she was “stage 4” (to give you an idea how bad this is, the chart only goes to stage 3), but now the doctors are hopeful that her treatments have been effective.

Unfortunately, this is still far from over for Nikol. She still has a lot of blood work and tests coming up, and an entire lymph node that may need to be removed via operation. Besides ravaging her body, her condition has also ravaged her finances—like many Americans, Nikol was unemployed and uninsured at the time she was diagnosed. She is paying out of pocket for most of her treatments, although she was able to make arrangements for a lower cost. However, during the week she was hospitalized due to the complications, her bills totaled $8000. Already unemployed at the time of her diagnosis, she’s incurred massive amounts of debt just to stay alive, and it keeps coming. Meanwhile, she’s had to hold in her nausea (sometimes unsuccessfully, which she’s turned into amusing stories for us) while riding the bus back and forth from L.A., because she doesn’t have a vehicle to drive when she’s too weak to walk.

She needs our help! And so we’re setting up a fund for Nikol to try and raise at least $3000 towards paying off debts, helping with treatment costs, and finding her a cheap car so she can take drive herself and her son rather than ride the bus, which often takes 3 hours to get to a destination. Rather than doing this through Kickstarter, we’re doing it through PayPal, so Nikol can access the funds sooner and so no cost at all goes into overhead.