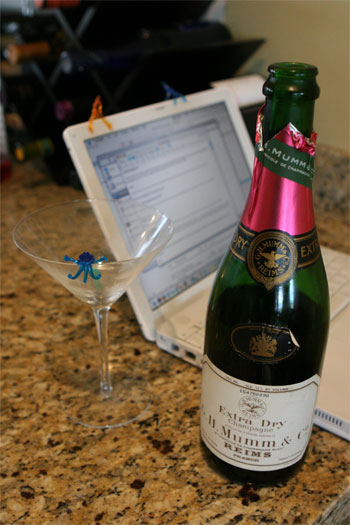 Lori and I had a few friends over to The Cephalopad on NYE to say goodbye to 2005 and welcome the unknown that is 2006. Of course being the incurable geek that I am, I decided to create a group blog post for those who wanted to say something at this transitional point in time:

Our hugs and kisses to Laughing Squid — special warm hugs to Scott and Lori for all of the good they do for our community.

I’m not so used to this iBook keyboard, more of a powerbook guy myself, have to look at all the keys to write things, kind of frustrating, especially since I am drinking and it is more difficult to see what I am doing when I move. Nonetheless, I am very happy to be here, I always speak very highly of Laughing Squid because I am huge fan of art and the whole concept of having people do things because they care instead of because there is a financial incentive.

So when I shake your hand, Scott, I am always grateful for even being able to do it, you have a great sense of what is real in a world (San Francisco) that is filled with a complete lack of reality. You and Lori have been a great stabilizer during my time here so I thank you again for making sure I have a place to plant my feet when I need to remember what real life is like.

Much love, in all the ways that are really love, to you all.

P.S. everybody is afraid to follow that one up.

so there are wine charms (and I’ve made them) but now we’ve got squid drink charms, hugging the glass to tell you which concoction is yours. tonight it’s different bastardizations on the Pimm’s Cup theme – Pimms, lemon, bitters, and other stuff – sometimes cranberry, ginger beer, or squeezed juice of orange slices. no cucumber but I don’t miss it.
but this isn’t supposed to be about the cocktails or even the conversation – this is, I am learning, supposed to be a sort of wake for 2005. seems a kind of strange custom – the year change has always been for me more the challenge (in grammar school at least) of writing year++ instead of just year on the header. now since nothing needs me to date it, takes even longer to adapt to the new year.

but no, andy gets the last word and says grrr back.

The photos from this party are going to be ridiculous. Especially the one where Tara gets the shocker from Ryan King. Be sure to check out flickr.com/photos/fenchurch.

Anyway, I decided that I should put my entry in before I get too ridiculous…y’know, the time of the night when I start saying, “I love you, man” to every pickle in the group. Sad, really. But, hey, that meme is mine and I’m sticking with it. I brought my young rogue, who happened to launch his very own blog today (no entries yet) (http://wildgorilla.wordpress.com)…so proud! So damn proud! Pretty soon, he’ll be giving the world all sorts of insight into his gaming tricks, his mother’s antics (yikes) and, what he likes to call, the Brat Pack 3.0…sigh, he thinks we are a little washed up. Sigh. Washed up before we even launch. I knew it.

Scott and Lori have a fabulous pad here, several levels of Squid-tastic ambience and much more civilized than you would ever expect from the tech world. Oh…and Chris (FactoryJoe) looks uber hot in his button up shirt, not so totally buttoned up…;) Photos to come…

Just heard Harry say to Mike: “Do you want to make a date one of these days so that we can play with each other’s…cds”. Whew, Thank God for that last word, I got scared and started wondering what kind of party I had ended up at for a little while there…

Everyone here is totally sexy. Everyone else, at every other party in the world, is currently … not sexy. I am sorry to report this horrendous non-sexy news.

There is no Ed. I’m serious. I looked and looked. All there was was this carpenter ant. He kept looking at me and looking at me, spewing volcanic ash and whispering, “it is undone, it is undone.” Scott, what the hell? I came around, y’know, expecting a laugh, expecting a squid. Scott, what the heck? The ant, man, that’s weird. Well, tentacles to ya mate, and fuck 2005, it’s all dirty whores anyway. Viva la resistance!

When I first realized that the life I wanted to live was possible, I found the squid list. There I saw the ideas and designs and schemes and fiascos of madmen, madwomen, mad mad minds. Inspiration surrounded me. That was 1996. Tonight it will be 2006. Thanks Scott and Lori. I’m really looking forward to the next decade.

Scott is a network system embodied.

I’m not accustomed to these late hours. you people are insane.

I just saved the file in case someone accidentally closed it without saving. And since it looks like someone spilled a little cocktail on the laptop here, I figured it’s a good thing to save often.

Hello, I am writing a blog. though I can’t fathom why someone would want to ever read this, I am writing nonetheless. If I actually had something to say, then I would be writing something of substance, but alas, all I have is this keyboard, and screen. Inspiration would have been nice, but no talent, no inspiration, just a forum for the stream of minimal consciousness that exists for me at this moment of time. I feel no inhibition at my lack of anything to say, because so few of those with the medium lack a message and I am no different. Unusual though I may be in that I realize the lack of value my writing has, you the reader are still reading this and clearly have not realized that nothing of substance or meaning will come in this posting. I am reminded of a drunk with a microphone, for whom every word has profound meaning, as his ego is boosted and his ramble perpetuated by the sound of his own voice being amplified, almost as soon as it passes his synapses. A self perpetuating solipsistic exercise that finds its parallel in the keyboard and blog. While the ego of the blogger gets continually replenished as he sees his words appearing for all the world to read as they stream across the screen in a self perpetuating exercise in self congratulatory, electro-visual masturbation. Unlike the drunk with a microphone analogy, there is no pissed off audience to boo, or stage manager to unplug an amplifier or use a hook to get them off a stage. Now while the writer gets a superficial ego boost with the satisfaction of having left his mark on the world in the form of some text pixels, I cannot fathom what the reader gets from reading such drivel. Is it the grand falume of recognizing the identity of the writer as someone he knew previously? or is it a search for a proverbial needle in a haystack, hoping to find a tidbit worth remembering, or a particle of entertainment? or is it an attempt to gain insight into an experience or event, hoping to see other perspectives. My motivation in this post is to test to see how much time one needs to waste reading one post before realizing the quest for meaning or satisfaction in reading said post is a futile one.

This is a great snap shot in time — the NYE community blog. What better way–aside from many glasses of wine, plates of chips and other munchies–to document the changing of the years than to blog about it only minutes before midnight. Presently, it is 11:52pm at Scott & Lori’s fabulous place in Potrero Hill–the clock is broadcasting on the wall in an ever changing color spectrum. Tara is passing around bottles of champagne to share…we’re about to ring it all in, this year ahead and all of its brilliant unknowns.

We’re partying like it’s 1999. May you ride your bubble asynchronously and hold your own You 2.0 conference on December 31, 2006 with amazing results.