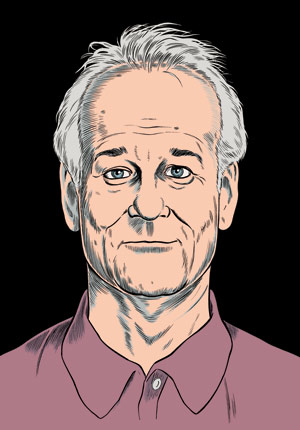 GQ published a fantastic and rare interview with Bill Murray which featured a great illustration by Daniel Clowes.

He is one of the greatest comic actors alive. A man who’s navigated his career with a peerless instinct for quality and self-respect. The man behind movies—from Caddyshack to Stripes, from Rushmore to Lost in Translation—that seem to have defined a dozen different moments in our cultural life. But he is also a man beholden to no one, not the studios, not the audience, not even an agent. And as he sits down with Dan Fierman to discuss everything from the lameness of Ron Howard to the genius of Kung Fu Hustle, you can be pretty sure he’s going to tell you exactly what he thinks.