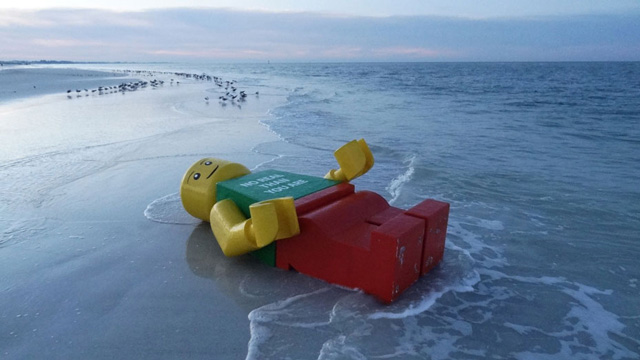 A giant Lego man named “Ego Leonard”, bearing the phrase “No Real Than You Are” on his chest, has been found washing up on beaches worldwide. The phenomena was first witnessed in 2007 in the Netherlands (video) and later in 2008 in England (video). Standing in at 8-feet tall and 100 pounds, Ego Leonard has now been discovered on the shores of Siesta Key Beach in Florida by local resident Jeff Hindman.

Prescription Art gathered this information from Ego Leonard, who appears to be the alter ego of a Dutch artist by the same name, (Prescription Art also sells his book and artwork):

“My name is Ego Leonard and according to you I come from the virtual world. A world that for me represents happiness, solidarity, all green and blossoming, with no rules or limitations.

Lately however, my world has been flooded with fortune-hunters and people drunk with power. And many new encounters in the virtual world have triggered my curiosity about your way of life.

I am here to discover and learn about your world and thoughts.

Show me all the beautiful things that are there to admire and experience in your world. Let’s become friends, share your story with me, take me with you on a journey through beautiful meadows, words, sounds and gestures.”