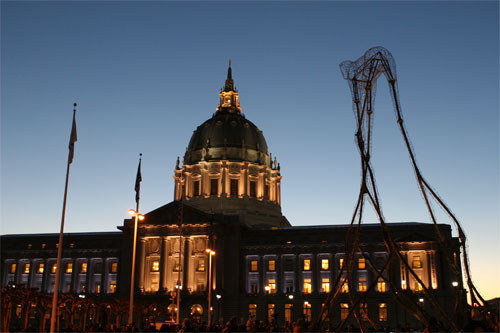 San Francisco artist Michael Christian’s beautiful and surreal 42 foot high sculpture “Flock” (not to be confused with the open source browser by the same name), which he created for Burning Man 2001, has migrated to San Francisco’s Civic Center Plaza and now stands ominously across the street from City Hall. Here are some photos I shot at last night’s dedication ceremony led by Mayor Gavin Newsom flanked by a group of local children. As part of the ceremony, Flock was illuminated by blue lights from below and as a special surprise, City Hall was lit up with blue lights as well to provide continuity with Michael’s sculpture.

Photos of the Flock Dedication

This installation, which will be in place for 3 months, was made possible by the Black Rock Arts Foundation (BRAF, the non-profit arm of Burning Man) who worked closely with the Office of the Mayor and the San Francisco Arts Commission. This is the 2nd installation that the Black Rock Arts Foundation has completed in San Francisco. The fist one was the David Best Hayes Green Temple which will be up until December 15th. There are plans for 5 more Burning Man installations to be placed throughout the city within the coming years.

Our goal is to help artists create interactive art in their own communities, year-round. We offer grants, help connect artists with other kinds of resources, offer support in finding sites for public display, educate the general public about the value and spirit of interactive art, and help artists document and publicize their work.

We have embarked on a long and exciting journey. We’re hoping you’ll join us! The Black Rock Arts Foundation’s mission is to change the way that people interact with one another through art, to help artists create a new cultural context, and (even if we have to use a very large sidecar) to transport the character of Burning Man to those mired in the mainstream.

If you would like to contribute to the Black Rock Arts Foundation and help them meet their goals, which includes bringing Burning Man art to local communities, you can make a donation directly through their website. Even Chicken John and The Royal Order of Winkers stepped up and made a sizable contribution to the foundation.

Speaking of Chicken John, this Sunday, November 20th at 1pm, he will be hosting a picnic at the base of the Flock sculpture. Chicken says:

My friends, the San Francisco arts community has out-done itself time and time again. So much so, that as we speak a giant metal sculpture that originally was intended for Burning Man now sits on civic center plaza lawn. With this achievement, we have reached an apex. And we must go back to the beginning. Back to the original idea of a gathering. Simple. Crude. Effective. Behold: we bring you……….the picnic.

UPDATE 1: Brian Walsh was there as well and shot some great photos.

UPDATE 3: The Civic Center blog has a write-up with photos on The Raising of Flock showing the process of how Michael’s sculpture was installed at Civic Center Plaza.

UPDATE 4: Here are some photos I shot at Chicken John’s Flock Picnic.