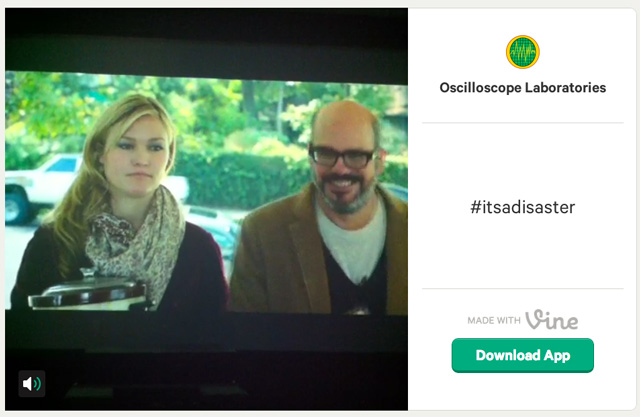 Film distribution company Oscilloscope Laboratories released It’s a Disaster, their new fast-paced ensemble comedy film starring David Cross, Julia Stiles, and America Ferrera, in a long series of short looping Vine videos today. Oscilloscope’s Minister of Informative Updates, Bruce Farnsworth says, “From the moment it launched just three short weeks ago, it was so clear to us that six-second loops of video, edited in-phone, and posted in real time was and will be the future of film distribution. While we still endeavor to release films via some other methods, we didn’t want to be left out in the cold and we are proud to be an early adopter of tomorrow, early.” The film will be released digitally on March 5, 2013 and on April 12, 2013 in theaters. To view the film in these short videos, follow “Oscilloscope Laboratories” inside the Vine app.

Eight friends meet for their monthly “couples brunch.” But what starts as an impromptu therapy session / airing of domestic grievances takes a sudden, catastrophic turn when the city falls victim to a mysterious attack. Trapped in the house and unsure of their fates, these seemingly normal people become increasingly unhinged to hilarious, surprising, and revealing results.