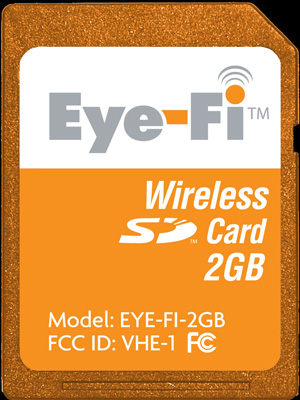 Eye-Fi has just announced the release of their new wireless SD memory card for digital cameras. The card, which they have been beta testing over the last year and a half, connects your local wi-fi network and automatically uploads photos stored on the card to your computer or to one of 17 online photo sharing services and social networks. The 2GB SD card is now available and is priced at $99.99.

Eye-Fi uses home wireless networks to eliminate the time-consuming chore of dealing with cables, card readers or software plug-ins associated with uploading photos. Users simply turn on their digital camera and their pictures are wirelessly uploaded. The Eye-Fi Card works with existing and new SD-compatible digital cameras and stores photos like a conventional SD memory card.

Last year I met with Eye-Fi CEO Yuval Koren who showed me an early prototype of their wireless SD card and I participated in their early beta program.