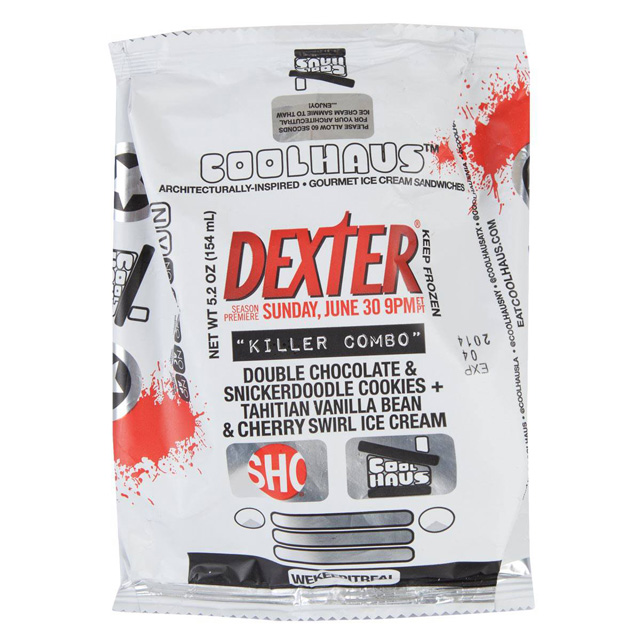 “We were so excited for the new season of Dexter on Showtime Networks we made this “Killer Combo” sammie for sale NOW on the Showtime website, our online store, and in our trucks and storefronts!!”

At SXSW Interactive in March, I was introduced to a couple of Dexter-themed gourmet ice cream sandwiches custom made by Coolhaus and served at the Showtime Lounge. I tried the “Killer Combo” that day, which had double chocolate cookies, Tahitian vanilla bean ice cream, a raspberry jam swirl and a edible paper-y wrapper (all of it delicious).

Cut to earlier this week when I was grocery shopping here in Alameda, California and I discovered that Coolhaus has packaged up a whole line of individual ice cream sammies which are available at gourmet retailers. There were several flavors available, so my daughter and I grabbed a couple to try: the Caramia Lehrer (a snickerdoodle cookie with sea salted caramel ice cream) and the Louis Ba-Kahn (chocolate chip cookie with brown butter candied bacon ice cream). We were both impressed by the subtle yet distinct taste of the ice cream and the perfect softness of the cookie in each sandwich. The Caramia Lehrer stood out and was definitely our favorite of the two. We’re looking forward to trying more!

Based in Culver City, California, two friends Natasha and Freya started Coolhaus as an ice cream truck in 2009 and now have expanded to run several trucks and carts, a Southern California storefront, an online store, and selling their products in brick-and-mortar stores like Whole Foods. Inside the Caramia Lehrer sandwich

My daughter SJ was first in line to try the Caramia Lehrer. She approves.

image 1 via Coolhaus Facebook page, all other photos by Rusty Blazenhoff