London-based contortionist Leilani “Lucky” Franco holds the Guinness world record for the World’s Fastest Human Backbend Walk, moving nearly 66 feet in 10.05 seconds. She says, “Whenever I’m at a party, my friends are always like, ‘Leilani, show people what you can do!’ and I say ok and I do something really weird and everybody gets really shocked. I really like that.”

Leilani Franco (UK/Philippines) travelled in a backbend position a distance of 20 m (65 ft 7.2 in) in a time of 10.05 sec at the Royal Festival Hall in London, UK, on 11 March 2013. A human backbend consists of only the participant’s hands and feet on the floor, with the arms extended above the shoulders and head, with the back completely arched.

She also holds the fastest contortion roll over a distance of 20 m (65 ft 7.2 in) in a time of 17.47 sec. A contortion roll requires the contortionist to start with their feet on the ground before arching backwards and propelling themselves forward in a chest-down roll.

Finally, Leilani also holds the record for the most full-body revolutions while in the chest-stand position in one minute with 25. This physically demanding exploit requires the contortionist to lie with their chest against the floor and with their back arched in such a way that their legs stretch over the body and the feet touch the ground in front of the face; the legs then make a full revolution around the body before returning to the original starting position. 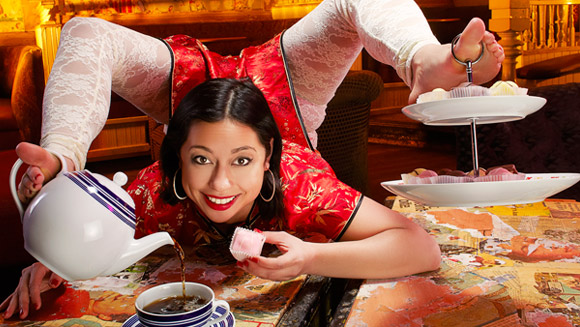