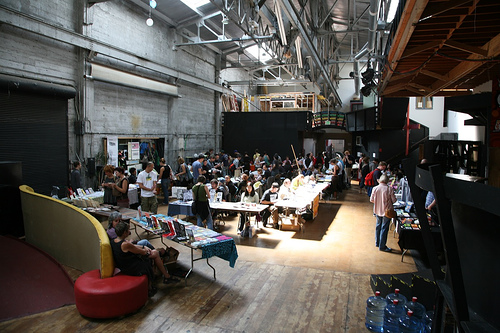 CELLspace is celebrating 10 years with a special Anniversary Gala this Saturday, October 14th.

Here is a short timeline featuring a few of my personal highlights from a decade of events at CELLspace:

– One of the very first events at CELLspace was “Toastosterone”, a San Francisco Cacophony Society event organized by Billy Ray Virus that featured heavily modified toasters competing against each other to see which one could shoot toast the highest and longest.

– Chicken John ran his weekly Sunday night game show “You Asked For It!” at CELLspace from 1997-98, which included the legendary Gong Show. It was at these games shows where we first met the great folks who ran the infamous bianca’s Smut Shack and would show up each week to serve grilled cheese sandwiches to everyone.

– The annual Expo for the Artist & Musician started at CELLspace in 2000.

– And the best for last, on March 10th, 2001, Lori Dorn and I were married at CELLspace in front of a crowd of over 300 people, complete with bullhorn ushers and rappelling ninjas.