Site specific sculpture artist Brian Goggin and Dorka Keehn are unveiling their new installation “The Language Of The Birds” on November 23rd, 2008, at dusk (watch the sky, not the clock!) in San Francisco on the northwest corner of Broadway and Columbus, where Grant and Columbus intersect in North Beach. 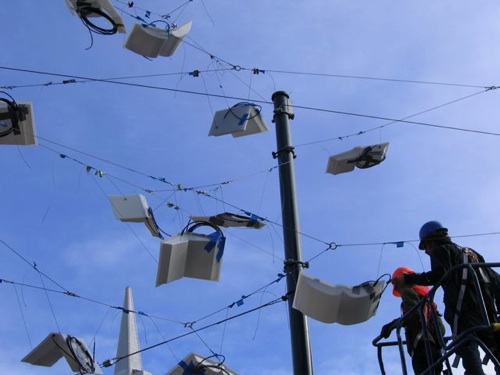 Brian Goggin, who is also know for the Defenestration sculpture at 6th and Howard Streets in San Francisco, among others, is collaborating with artist Dorka Keehn on The Language Of The Birds.

This public artwork is a sculpted, illuminated flock of twenty three translucent, suspended open books with bindings positioned as if they are the wings of birds in flight. These books will appear to be taking off and flying above the plaza.

Phrases, taken from books by neighborhood authors or written about the surrounding communities, will be scattered and embedded in the plaza as if the words have fallen from the pages, forming an aesthetically beautiful and random pattern. The words will maintain their fonts from the books and will range from 1.5’’ to 3”.

At night the books will act as fluctuating lanterns light up by internal LED lights. The changing lights effects will be prompted by the unamplified beat and tempo in selected recordings of Jazz and other music played in the area over the last fifty years.

Rumors about the actual unveiling of the piece hint to a choreographed extravaganza involving The Extra Action Marching Band, dancing in the streets, and being deeply appreciative of the San Francisco Arts Community. Mayor Gavin Newsom, Supervisor Aaron Peskin, SF Arts Commission Executive Director Luis R. Cancel and other honored guests will speak before the hardcore partying gets started.

UPDATE: Photos & Video of The Language Of The Birds Unveiling