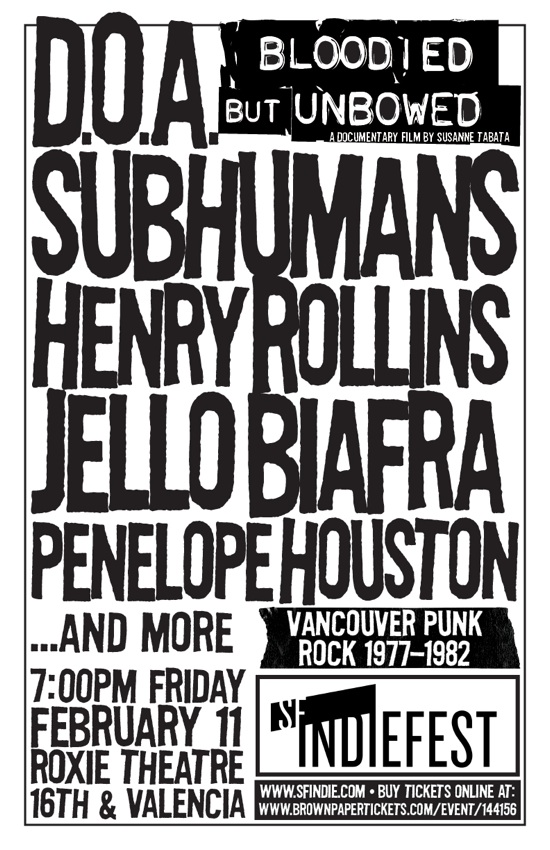 I’ve been wanting to post to Laughing Squid for many years. I’ve always said “yeah, yeah, I’ll get to it when something strikes my fancy”. Well, this something is something else.

When we think of the late 70’s punk era, we usually think of San Francisco, London and LA. Yes, yes, NYC and Boston should have a nod in there as well. We don’t often think of Canada, or more specifically, Vancouver. Vancouver actually had quite a music scene going for many years before bands like D.O.A. with Randy Rampage and Joey Shithead, the Subhumans, the K-Tels, which became the Young Canadians after they were threatened by the marketing company of the same name; and U-J3RK5 (pronounced you jerk (the 5 is silent) came around. Even Tommy Chong had a local soul group “Little Daddy & The Bachelors” in the early 60s.

A new film, Bloodied but Unbowed, by Vancouver director-writer and former radio DJ, Susanne Tabata tells the story of how a scene can emerge from essentially nothing, with musicians that had practically nothing but the guitar straps across their backs, raise the crowds to their feet, beat down upon the souls of these musicians, many of whom wouldn’t survive past the age of 25, and be on its way like a massive Canadian ice storm.

Tabata takes the survivors of this scene (and unfortunately there aren’t many), which include members of D.O.A., The Pointed Sticks, Subhumans, the Modernettes and Young Canadians, and tells their story using archival footage, music, photos and interviews. Along the way American punk legends Jello Biafra, Penelope Houston and Henry Rollins share the influence of the Vancouver scene on their own music.

Bloodied But Unbowed chronicles the late 1970s/early 1980s Vancouver punk rock scene. Vancouver filmmaker Susanne Tabata’s documentary tells a tale of rebellion and music — a fiercely independent scene created from nothing and played out in a microcosm of urban squalor. Told by its surviving stars whose accounts are suffused with both humour and gritty realism — a distinctly Vancouver vibe. A brutally honest story from the streets and stages of the West Coast through interviews, music, photos, and archival performances. Overarching those halcyon days of poverty and excess is the MUSIC — that moved its audience to their feet and seemed to validate their very existence.

Vancouver was a scene, isolated from the rest of its nation, that shouldn’t be forgotten. With Bloodied but Unbowed it won’t be anytime soon. It’s playing at the Roxie during the SF Independent Film Fest on Friday February 11th and again on Valentines Day, Monday, February 14th.

You can buy tickets for the screenings through Brown Paper Tickets.