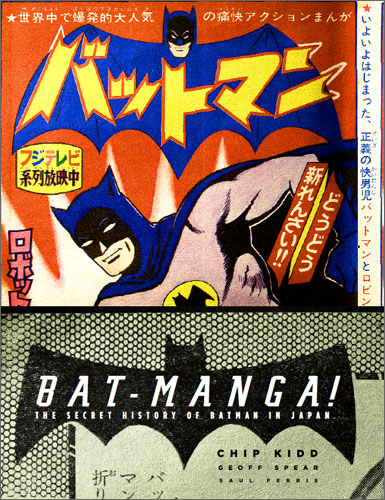 “BAT-MANGA! The Secret History of Batman in Japan” is a new book by Chip Kidd published by Pantheon Books about the 1966 comics cross-over of Batman and manga. Last Gasp is hosting a special reading and book signing event with Chip Kidd this Thursday, November 13th at 111 Minna Gallery in San Francisco.

The two hottest genres in comics gleefully collide head-on, as the most beloved American superhero gets the coolest Japanese manga makeover ever. In 1966, during the height of the first Batman craze, a weekly Japanese manga anthology for boys, Shonen King, licensed the rights to commission its own Batman and Robin stories. A year later, the stories stopped. They were never collected in Japan, and never translated into English. Now, in this gorgeously produced book, hundreds of pages of Batman-manga comics more than four decades old are translated for the first time, appearing alongside stunning photographs of the world’s most comprehensive collection of vintage Japanese Batman toys. This is The Dynamic Duo as you’ve never seen them: with a distinctly Japanese, atomic-age twist as they battle aliens, mutated dinosaurs, and villains who won’t stay dead. And as a bonus: Jiro Kuwata, the manga master who originally wrote and drew this material, has given an exclusive interview for our book. More than just a dazzling novelty, Bat-Manga! is an invaluable, long-lost chapter in the history of one of the most beloved and timeless figures in comics.