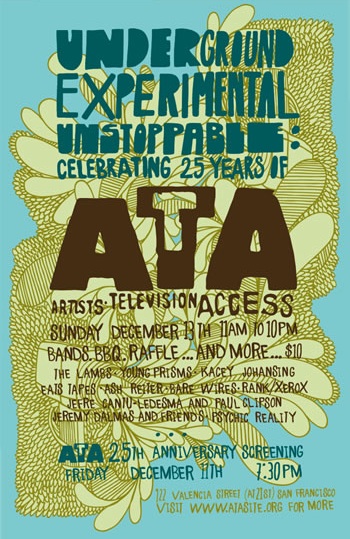 San Francisco’s legendary underground film venue Artists’ Television Access (ATA) is celebrating their 25th Anniversary with an opening of a time capsule and screening on Friday, December 11th and an all-day fundraiser on Sunday, December 13th.

Congratulations to our friends at ATA on 25 amazing years!

ATA was founded in 1984 by a group of young, radical artists and activists committed to using video, performance, art and education to foster culture and community. Today, ATA continues to be a vehicle for independent and alternative artists in its Mission District space. Since its conception, ATA has presented thousands of film and video screenings, performances, gallery exhibitions and workshops.

ATA was established by artists John Martin and Marshall Weber as a performance art space, screening venue and gallery and included an affordable video production facility located on 8th Street in San Francisco’s South of Market district. It was one of the first organizations in San Francisco to consistently promote the work of video artists. Other artists associated with the early days of ATA include Craig Baldwin, Lise Swenson, Phil Patiris, Eva Koenig, Rigo 23, Fred Rinne, Scott Williams and Dale Hoyt. After a fire on 1986’s Halloween night burned down the space, ATA moved to 992 Valencia Street.

According to Marshall Weber, in San Francisco back in ’82/’83, “most of the major art venues did not show video art yet and there was no video art or media curator at the MOMA. Most of the performance and gallery spaces were started in the 70s by people who were mostly doing body performance and installation…not traditional art forms but not heavily influenced by media…But we wanted people on the streets to come into our gallery to use our services. So it was kind of naive outreach where we kind of talked to people ‘you know if you’re on any kind of general assistance you can use our editing system for free.’ We literally had a 100% subsidy program for almost 2 years. We also had an honest political committment to access, working with the Teen Parenting Program at SF General, Earth First, ACT-UP etc.”

ATA is still an artist-run, all-volunteer organization with a commitment to access. The 25th Anniversary will be celebrated with the opening of a time capsule at a screening celebrating the artists that have helped make ATA possible on Friday, December 11th, and an all-day fundraiser party on Sunday, December 13th.