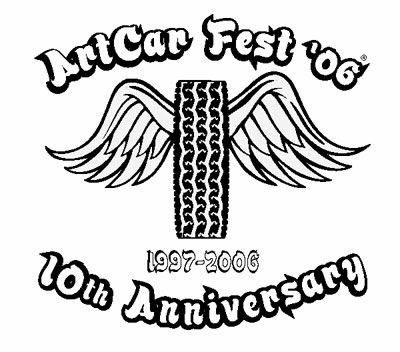 The ArtCar Fest is celebrating its 10th Anniversary this year with another great weekend of events featuring art cars from around the country. Here’s the full schedule:

Keep your eyes on the rearview mirror! Starting at Amoeba Music in San Francisco (1855 Haight St.), ArtCars will cruise SF, including the Marina, Fisherman’s Wharf, and the Embarcadero, then hop on the Bay Bridge and visit Amoeba Music in Berkeley (2455 Telegraph Ave.)

ArtCar Fest kicks off its 10th anniversary celebration with a party at Pyramid Brewery at 901 Gilman St. in Berkeley. Great food & drink, live music from the flamboyant and caffeinated Cartoon-Jazz band, Dr. Abacus, and a special screening of the final cut of Wild Wheels 2, Harrod Blank’s sequel to his award winning documentary about ArtCars. Only $5!

ArtCars will visit schools to inspire kids to follow their creative dreams and maybe even do something cool to their family minivan!

The San Jose Museum of Art (110 S. Market St.) is hosting the ArtCar Fest for the fifth year in a row! The most original & impressive surf-rock combo out there, the Mermen, headline the live performances. The Museum will host ongoing ArtCar activities for kids, and of course Dr. Howland Owll & Annie Coulter Couture’s famous ArtCar Fest Fashion Show.

OutdoorArtCar exhibit is Free.
Museum exhibits inside have an admission charge.

How Berkeley Can You Be? Parade & Festival
Sunday, September 17
11am – 5pm

As always ArtCar Fest joins the legendary “How Berkeley Can You Be?” Parade and Festival.