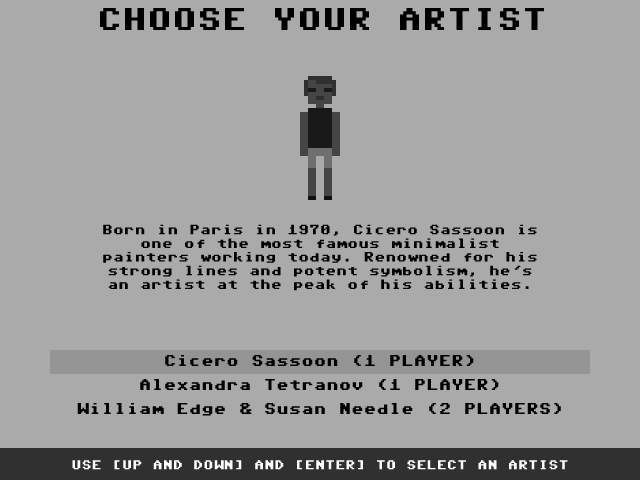 Art Game is a simple browser game from designer Pippin Barr that allows users to create art out of classic games. Players can choose between painter Cicero Sassoon, who paints with Snake, and sculptor Alexandra Tetanov, who sculpts with Tetris. The game also has a two player mode, in which players create a video by cooperatively playing Spacewar. Barr told Gamasutra that the game wasn’t intended as a direct commentary on the rising trend of art games. “The idea of going out of my way to make a self-proclaimed ‘art game’ seemed a funny approach to the idea,” Barr said. “I don’t know how many of the ‘real’ art game makers are sitting there thinking ‘this is an art game’, or ‘I am making an art game,’ so I kind of wanted to go right at it.” Instead, he wanted to give players the “feeling of making something, giving it a name, and putting it in front of other people to see what they think.”