Herein, you’ll see a parade of celebrities join Nick Packard in knocking ‘em down the hard way, including Parks and Recreation‘s Adam Scott and Aubrey Plaza doing it Hollywood backstage style, John Goodman with a pergola relay, It’s Always Sunny in Philadelphia‘s Rob McElhenney with a bounce over an SUV, Boardwalk Empire‘s Jack Houston rolling out the trampoline, The Office‘s Craig Robinson with a basketball angle, Thomas Lennon and Robert Ben Garant with a Gallic flair, and so on, until you get Mr. Chris Hardwick spinning his way into your heart with a tandem trick shot. 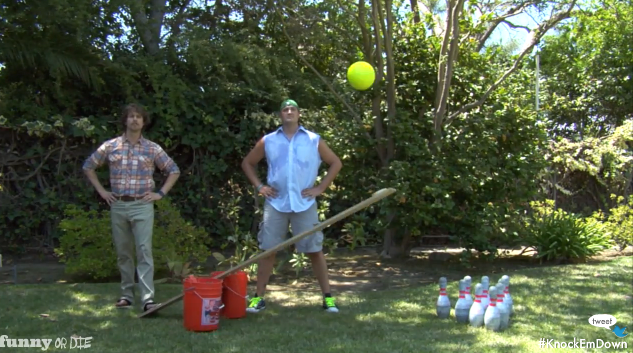