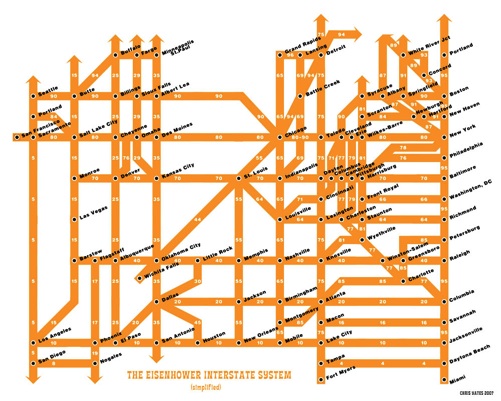 Boulder, CO artist Chris Yates created an abstract, London Tube-style map of Dwight Eisenhower’s Interstate highway system which you can buy as a print for $12 plus shipping.  You know, in case you’re planning to defend the United States from a full scale ground invasion and need to move tanks from Butte to Buffalo as Eisenhower was.  Otherwise, it brings to mind history, geography and transportation into one thought-provoking image.

Via Mark Schoenveld of The Poverty Jet Set, who also included another fascinating and beautifully designed illustration showing estimates of when worldwide mineral resources will be exhausted by industrial production.  According to that graphic, key components in the cars that travel the aforementioned byways, including silver, aluminum, chrome and platinum may run out before even world oil reserves.

I don’t think Ike ever imagined building the world’s largest, national, paved bike trail network, but according to these maps that seems to be where this road trip is headed.