Polaroid cameras sponsored “The Tonight Show” with Steve Allen and later Jack Paar for many years in the 1950’s and 60’s. In that era show hosts commonly endorsed products during the show rather that just cutting to commercials. This clip from a 1960 episode shows Jack Paar trying to do his in-show plug for the Polaroid Land Camera while comedian Jerry Lewis generally runs amuck and literally drives Paar up the wall.

Nearly 40 years later, here’s a Polaroid I-Zone camera ad circa 1999 which features a young Aaron Paul (Jesse on Breaking Bad) as a happy sticky-picture-snapping teenager–he was about 20 at the time. Click the image to see the video. 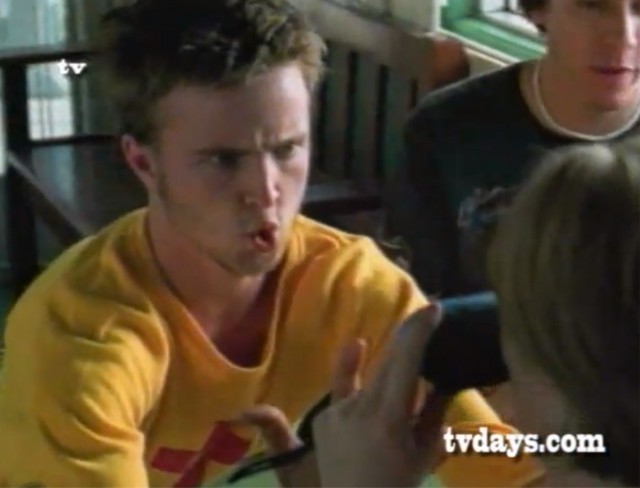 Of course Polaroid ain’t what it used to be:

On October 11, 2001, Polaroid Corporation filed for Chapter 11 bankruptcy protection. Almost all the company’s assets (including the “Polaroid” name itself) were sold to a subsidiary of Bank One. They went on to form a new company, which also operates under the name “Polaroid Corporation”. It stopped making Polaroid cameras in 2007 and stopped selling Polaroid film after 2009, to the consternation of many users.

However Polaroid film is at least available again thanks to the Impossible Project. A vintage Polaroid commercial montage is below including both these ads plus appearances by Jack Paar, Steve Allen, Barry Manilow, James Garner and more.