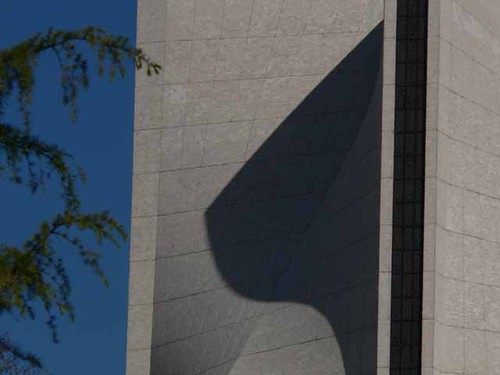 San Francisco is famous the world over for beautiful and historic landmarks like Coit Tower and the Golden Gate Bridge. But for many years, one SF landmark remained a local secret, due in pert to it’s ephemeral nature. Known as “The Two O’clock Titty”, the unique shadow shown above only appears on Saint Mary’s Cathedral twice a day, and then only during certain times of the year.

In a recent and rather cleverly-titled post (“Topless Peepshow on Display Daily at SF Church”) NBC Bay Area reporter Josh Keppel experienced a vision which led him to propose naming the serendipitous shadow woman “Rose”.

Just then the planets aligned. Well, the sun, the street sign, and I aligned and a rainbow appeared in the reflection of the sun on the Rose sign as the 2(:)00 arrow pointed right at the Cathedral.

So I’m here to propose that this formerly nameless and shameless shadow be given the name Rose, Our Lady of the Two O’clock Titty. And a year from now, on the Sunday when we turn the clocks forward an hour, the fans of Rose should meet up on the corner of Rose and Octavia streets at 2 p.m. and toast the funny things in life that we can’t control or anticipate.

I’ll drink to that! 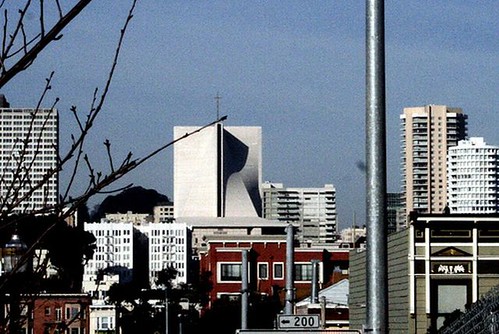