The little known animated short “Tom Waits For No One” has a fascinating history. It was filmed back in 1978 as a fun project to use as a test for some new film-making technology. The production utilized 5 cameras, two strippers and the then 28-year-old Tom Waits. The resulting animation has 5,500 frames and runs about 5:30 + credits. 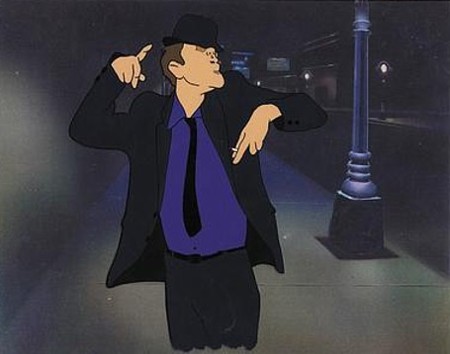 This short was created by rotoscope – a process that traces back the live action frame by frame and turns it into animation. The original live action was shot with 5 cameras – 2 high, 2 low and one hand held. The music from “The One That Got Away” blared in the background as Tom Waits sang karaoke style different lyrics on each take. Two strippers, 6 takes and 13 hours of video footage were edited to make a 5 1/2 minute live action short which we turned into animation. A total of 5,500 frames were caricatured and then re-drawn, inked and painted by hand onto celluloid acetate to produce this film.

Of course, the test part wasn’t of rotoscoping itself, which dates back to the 1910’s, but of a patented method to quickly preview (“pencil test”) animation in progress. Ralph Bakshi was interested in using it for the first time on rotoscoped video for his film American Pop (1981). So the developers of the process, Bruce Lyon and John Lamb, decided to undertake a proof of concept project to sell it to Bakshi. Their tech went on to win a Scientific and Technical Achievement Oscar, but they never found a deal for this animation and so it was basically never seen (IMDB lists a couple festivals in 1981). 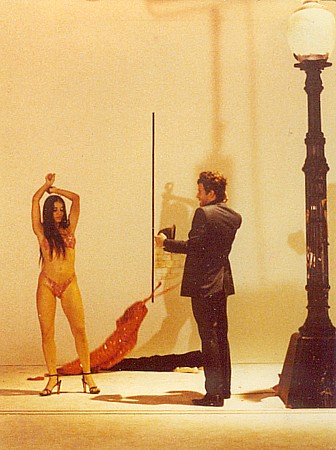 Photography by Gary Beydler as seen on The Tom Waits Library

Through chance Lamb & Lyon ended up seeing a Tom Waits live show at about that time–they skipped Star Wars because the line was too long and Tom was playing next door. They decided that one of his songs would be a great subject for their test animation. That led to conversation with Waits’ management and even a visit to his infamous lodging at The Tropicana Motor Hotel, here is John Lamb‘s description:

“He had 2 adjoining rooms with the common wall removed to make the joint bigger. Newspapers, manuscripts, ash trays and empties cluttered up the digs about waist to shoulder high throughout. A path literally led from the fridge to the piano.. piano to the couch.. couch to the bedroom and so on. If it was foliage, you would have needed a machete to hack your way through…the path was just wide enough to maneuver your torso through, sometimes having to turn sideways to navigate a tight turn. “

Kudos to The Tom Waits Library for their extensive info about this short including a longer interview with Lamb on the making of the animation, and this summary of the credits:

Director John Lamb, Keith Newton (character design) and the chief animator David Silverman (whose most recent credits include producer of the “Simpsons”, the “Wild Thornberrys” and his latest achievement, “Monsters” by Pixar) deserve to be acknowledged for this extraordinary work.