Many people are very upset about Tuesday’s premature burning of Burning Man, but others consider it to be the ultimate Burning Man prank. For years the joke on the Playa was to set the man on fire early and in the mid 90’s Bigrig Industries used to hand out match packs printed with the words “Burn The Man Early”.

Tuesday’s news has been awakening many ghosts of Burning Man past and today we were sent an anonymous email from the people behind the Neon Smiley Face. The message is directed to Paul Addis, the person accused of lighting the man on fire early. Here’s what they sent us, which includes some background info on Smiley:

Word travels fast around here. I see by my Daily Albatross Dispatch you torched that infernal stick figure. Jolly good show man. I don’t get much action these days so it was quite refreshing, your stunt. Reminded me of the early days, back when premature immolation was considered a prank. Although I’m sure Steve Heck would disagree.

I think you’ve done a valuable service to human kind; the old boy was getting a bit passe anyway. Wanton destruction is so twentieth century don’t you think? Perhaps now the hoards will come up with a way to make fun without atomizing tremendous amounts of fossil fuel, petrochemicals and timber. Perhaps create something to be used more than once, something with purpose. And maybe they’ll stop following that silly hat around, there’s nothing behind it you know.

So good on ya man, thanks for the dust up. I hope UuberManCorp heLLC don’t throw the book at you. That would surely reveal lack of grace and loss of good humor.

Thanks again, you provide much needed perspective my boy.

I’m off to cook some tofu dogs in my solar oven with no tell tale sign of smoke to give me away.

The idea is, everything in society is owned and operated by Helco. The supra-national conglomerate that recently has also successfully purchased Hell for an undisclosed record amount of cash and stock options. People really seem to be taking it all a bit too seriously. Hell is on everybody’s mind and lots of art projects reflect the preoccupation.

About June sometime, after a talk with Larry to glean some insight on how serious he was about it all, a plan was hatched to secretly install a neon smiley face in the Man’s head, which would be switched On just as his immolation began.

The plan was to put a sublime or whimsical spin on the all too serious darkness of the whole ordeal at that point. The idea that we could mock society and its foibles even to take a swipe at western religion while simultaneously exalting and in fact elevating our own Icon in our own Image was an obvious disturbing hypocrisy to many of the Cacophanists. Yes we saw it coming, even in June.

On Saturday evening before the burn (we burned the figure on Sunday back then) we had ourselves a little playa theatre.

With the Burningman Project in its sights, Helco’s lawyers maneuver themselves for a hostile takeover. A board meeting is held at Helco tower. Satan himself appears along with Mr. Clean, the Michelin man, Ronald Mc Donald, Ken and Barbie et all. They vote unanimously to buy the Burningman Project at any cost.

Just in the nick-of-time Ted “Unibomber” Kaczynski detonates flammables in the tower, which immediately explode in a ball of fire. The Unibomber zips out of a top floor window down a cable into a wall of neon lights sending a shower of sparks sufficient enough to allow a swift getaway.

The SEEMEN robots and machines set about destroying a mock strip mall to the shock and awe of all present.

Hell is upon us. Sometime after midnight, Smiley was switched On for about 1 minute. A curious murmur made it’s way around camp.

The next morning Larry came out to the Man and stood there for nearly an hour staring at the head. When the sun rose up behind it, the shadow of the smiley neon revealed itself.

Larry was outraged, incensed, indeed furious at the sight. He screamed at Dan Miller to “get that god damned thing out of MY man!” At which time Dan needlessly risked his safety and the rest of the neon installed on the figure to climb up the structure and remove the offending smiley face.

What was revealed at this point is that Larry wasn’t interested in the idea of the “community” having any input in “his” project. He knew as we all did the “theatre” of Hell was affecting the dynamic out there. In fact, we had “sacrificed” one of our own (Michael Fury RIP died in a motorcycle crash) the previous Tuesday. And in fact the carnage from Saturday the night before was just becoming more apparent. Still he was determined to fulfill whatever his vision was no matter what the costs were on the rest of us. It’s clear now he was positioning himself for his own version of a hostile takeover.

So while Larry pontificates ceaselessly on how the Man belongs to everybody at the event, reality is quite opposite.

The moral of the story?
Don’t worship false idols.
Bring your art home!

UPDATE: In the comments Dan Miller mentions another incident where the head of the sculpture was altered a few years later during Burning Man 1999:

I think a more interesting twist on the look of the man was in ‘99, when the mans head was stolen and we put a goofy easter island paper-mache head on him for a few days. It was run on the cover of the Reno weekly. 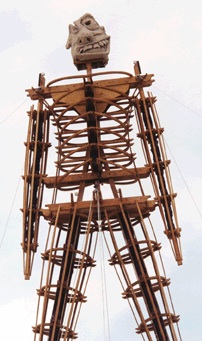