Recent events have sparked quite a bit of discussion regarding the history of Burning Man, an event that has been a major influence on my life as well as many of my close friends.

With Burning Man 2007 tickets going on yesterday, I thought it might great to take a look back at Burning Man 1990, a major crossroads in the evolution of the event. This was the year when the annual Memorial Day beach burn at Baker Beach in San Francisco, started by Larry Harvey and Jerry James, transitioned into a Labor Day weekend art event in the Black Rock Desert. Black Rock City was born when the San Francisco Cacophony Society took Burning Man to The Playa in an event known as “Bad Day At Black Rock” (Zone Trip #4) which took place September 1-3, 1990.

Here’s how it all happened in the words of those who were there.

“The First Year In The Desert”

“The celebration of Burning Man’s annual fire ceremony began in 1986, created by Larry Harvey and Jerry James. For the next four years, its annual fire party was held at Baker Beach in San Francisco. In 1990, the Park police interceded to prevent the culminating conflagration of the statue. This was a transitional moment for Burning Man as the event evolved with a new location, a change of date, and the beginning of a new meaning for the celebration. This viewpoint is an observation of the events surrounding Burning Man’s presence in that year.” [read more] 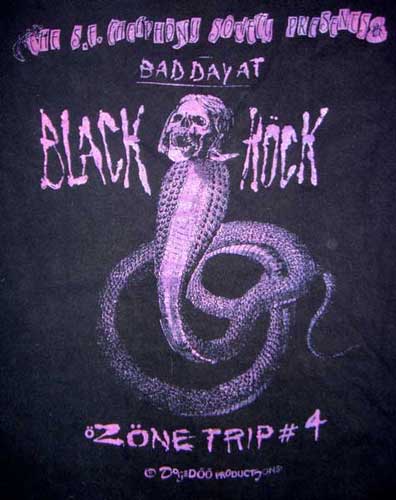 “Labor Day weekend, 1989. I, with my roommates Miss P., Dawn & a mutual friend Cindy attended a wind sculpture event in the Black Rock desert sponsored by Planet X pottery in Gerlach Nevada. We hauled a lightweight mobile canopy bed (our sculpture) on top of a tiny sedan out to this remote, inhospitable area. The surreal local combined with mobile sculptures was both incredible and inspiring. That weekend was one that had a great & lasting impact on my life. I never wanted to leave. The desert attracted & stirred me, & I knew I had to go back.” [read more]

“The caravan of ill-assorted vehicles assembled at the baseball diamond in Golden Gate Park as a late-summer dusk promised a fine night for entering the unknown. Our ringleader, John Law, would drive the huge Ryder truck always rented for our larger absurdist escapades. It would be hours before weâ€™d actually get into the vehicles and begin. As always, when a Cacophony Society Zone Trip called adventurers to leave San Francisco, the stragglers came late, and the last-minute preparations detained us further.” [read more]

“One night, my friend mentioned an event she knew of: An acquaintance of
hers threw a biannual production in the desert which fell within the
context of Performance Art. One year was a larger-than-life croquet game
played with trucks and giant steel framed â€˜ballsâ€™. Coming soon was a Wind
Sculpture Festival. Apparently the winds could get up to sixty miles per
hour. Our collective juices began to flow. What could we build that would
be fun under those conditions? What would be silly and interesting and
eye-catching, maybe even thought-provoking, as it flew by?” [read more]

“It was back in the days of no authorization by the BLM, or by anybody! We just went ahead, set up and did it. John Law was the most instrumental person in making this happen in the Black Rock Desert. It was called â€œZone Trip #4.â€ It was really a Cacophony Society event primarily organized by John Law (and the “Black Rock Desert Rangers”) with the Burning Man as a later added feature… and what a fine feature it was! It was a lovely time, back before the days of huge insurance costs or worries of petty theft.”

Where you one of the 89 participants at Burning Man 1990? If so, I would love to add your story, just let me know.