The Nasal Ranger is a vaguely telescope-shaped device that is used to detect and measure smells, also known as a field olfactometer. The Nasal Ranger does not detect odors by itself. Instead, it allows an operator to compare an ambient odor to fresh air with the aid of a carbon filter. The smell is measured in a ratio called dilution-to-threshold. As Vice reports, a Nasal Ranger has been purchased by Denver environmental health officials to investigate odor complaints involving the city’s marijuana businesses. The Nasal Ranger is produced by St. Croix Sensory, a sensory testing and training firm in Minnesota. And for people who want to visualize their odor data, St. Croix Sensory has created a smell mapping system called ODOR TRACK’R. 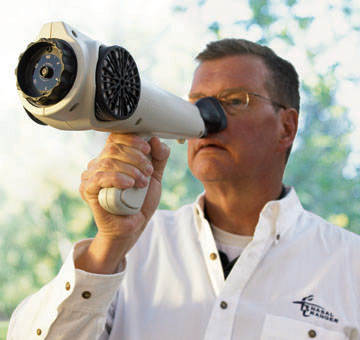 photo via St. Croix Sensory, video via The History Channel